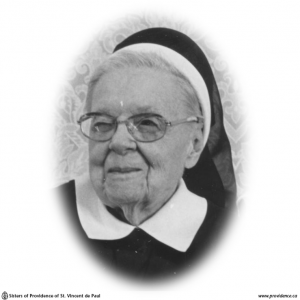 For years “Readers’ Digest” magazine ran a series of articles entitled, “The Most Unforgettable Character I’ve Met”. The only reason why Sister M. Roberta was never the subject of one of these descriptions was that she kept us all too busy to have time to submit a composition! Now, after Sister’s death, in the appendix to this necrology Sister Mary Publow sketches Sister M. Roberta and, surely those who knew her will say, “Yes! That’s how I remember her, too.” But first, a brief account of the most important moments of Sister M. Roberta’s life.

Like several others, Irene was directed to the Sisters of charity of the House of Providence, at Kingston, by Father Louis Cotter, S.J. He arranged for her to visit the Motherhouse on August 31, 1915, with another Montreal girl, Irene Isobel Carter, who was to become her classmate. On her return home she wrote, in less than a month, asking permission to enter. She expressed “much interest in the works of the Sisters” and promised to give the pending decision a place in her daily Communion intentions.

The reception of the two postulants took place on January 9, 1916, and the annalist’s prayer was prophetic, “God grant they may persevere and become holy and useful subjects.” Irene Connolly was to serve twenty-six years as Treasurer General and Irene Carter (Sister M. Lenore) would become a Councilor and Superior General.

After her novitiate, Sister M. Roberta was assigned to look after the Sisters’ kitchen in the House of Providence. Here, she had her first opportunity to help in the training of the novices and postulants sent to work under her charge. Sister Loretta Buchanan, who was one of these postulants, recall (as many of us do) that she was an excellent cook and a good overseer, and her kind heart knew how to overlook “the child” who got distracted from her work by finding a home-town newspaper in the storeroom. The dish-washer, at the time, was a poor fellow who had an obsession for hoarding bread. Sister M. Roberta was never cross with him, but dealt with his weakness gently.

Sister continued to have charge of the kitchen until the summer of 1926 when she was sent to Camrose to take over the office of St. Mary’s Hospital. It was hard for her to be missioned so far away at that time because her mother was very ill in Montreal and, besides, the Sisters of the House of Providence felt they needed her. The annalist moans, “What shall we do at the Motherhouse”?  All the strong Sisters going, leaving the broken down ones at home.”

Sister needed to be strong, for long, hard days awaited her in the west. She proved herself worthy of the trust placed in her. Official visitors brought back to Kingston good reports of her work. In April, 1935, the General Administration elected her to be the first Provincial Superior for the West. Four Assistants were also chosen, but that summer the plan was abruptly dropped. In 1936 Sister was appointed Superior of the Providence Hospital, Moose Jaw. She laboured there until 1945, except for one year at Rosary Hall, Toronto, which was between terms as Superior in Moose Jaw. During the “dirty thirties” and the early years of World War II, Sister M. Roberta’s faith, determination, business skill and ability to secure cooperation were tested to the utmost. Patients had no way to pay bills except with farm produce or meat, or by sending their daughters to work in the hospital. In Moose Jaw the money was needed not only for day-to-day operating expenses, but to pay off the capital debt and compound interest on a loan.

In July, 1945, the Chapter chose to make Sister M. Roberta’s skills available to the wider Community and she was elected General Treasurer, replacing Sister M. Alacoque (Scott). She continued in this demanding office under four Superiors General. It was a period of growth in the Community. There were land purchases and building projects to tend to as well as the daily round of affairs. Sister’s work in landscaping the grounds of Heathfield, supervising the addition of the infirmary wing, administration wing, kitchen, and novitiate, purchasing and developing Marillac Villa, and laying a sound financial base for the Community have left all the Sisters greatly indebted to her for years to come.

In 1971 Sister M. Roberta retired and a month later she took up residence in the infirmary. She was a prolific reader and her pursuit of books – especially good detective stories – plus playing cards and doing jigsaw puzzles kept her mind keen. She was often able to assist her successor as General Treasurer, Sister Patricia Ann Ryan, through her memories of the past and advice for the future. Although she became quite deaf, she was delighted to have visitors and used an erasable slate to “hear” them. In 1981, the Chapter honoured her with a special letter of commendation.

In the 1940’s while visiting Winnipeg on a business trip, Sister had fallen down a flight of stairs and suffered a hairline fracture of the right front of the skull. Around 1950 she experienced a seizure, apparently a result of the fall. Dr. Wilder Penfield, Montreal neurosurgeon, advised her not to attempt to correct the cause through surgery. Over the years form then until her death, she endured many of these frightening “spells”, but she did not allow them to keep her long away from her work.

January of 1986 was, like many Januarys a time of colds and flu. Several Sisters in the infirmary developed pneumonia and among them was Sister M. Roberta. The situation was made more serious when she began to have seizures at 5:30 on the morning of February 1. The seizures could not be stopped by the usual treatment and Sister suffered a heart attack as well. At 6:00 a.m. she was taken to Hotel Dieu Hospital. There, on life-support systems at first, Sister survived until February 5, at 1:22 a.m. Sister Patricia Ann Ryan, who had unstintingly attended to her needs through her retirement years was with her when death came.

The concelebrants of the Funeral Mass on February 7 were: Archbishop J. L. Wilhelm, Rt. Rev. Monsignor J.G. Hanley, Rev. J. Rozon and Rev. L. Byrne. In his homily, Monsignor Hanley compared Sister M. Roberta to Martha in the Gospel story – she did well the work that had to be done, so that the religious life of all her Sisters could be more fruitful for them and for the poor they served. But, as we search our memories, we remember not just her accomplishments, but also her personality. God truly made, “one of a kind” in Sister M. Roberta! Having been faithful to His design, she now enjoys Him for ever in eternity.