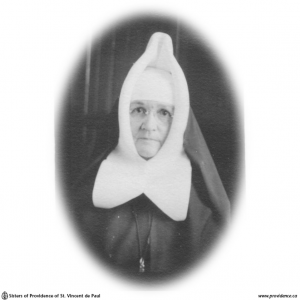 After profession Sister was appointed to resume her studies in order to qualify for a teacher. Her first appointment was principal of St. Peter’s School, Trenton, where she was actively engaged up till the time of her last illness.

Sister was gifted with a very active mind and generous spirit. No burden was too great if she could accomplish her purpose for the greater glory of God and the help and benefit of her neighbour. Her zeal extended not only to those under her immediate care, but to all those with whom she came in contact.

When she became ill she was given five weeks leave of absence to receive medical treatment, confident of returning at the end of that time, but God ordained otherwise.  When told that nothing more could be done she humbly resigned herself to God’s will.

The people of Trenton, to show their appreciation of her long years of service, erected a memorial plaque at the scene of her labours in St. Peter’s School.