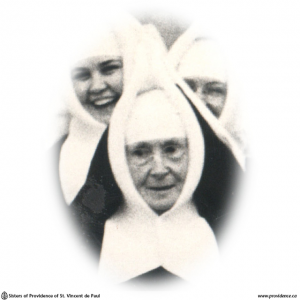 Sister Mary Romana, the former Catherine Mulligan, died after a lingering illness at the Marian Infirmary, Heathfield, Wednesday July 5th. Sister was in the forty-sixth year of her religious life. Born in Picton, Ontario, she was a daughter the late James Mulligan and Catherine Quinn. She entered the Sisters of Providence Community in November 1915. After completing her Novitiate Sister studied nursing in Smiths Falls Hospital where she graduated and then took up laboratory work. As lab technician she practiced for a number of years in St. Francis Hospital, Smiths Falls and St. Vincent de Paul Hospital, Brockville.

About ten years ago, in delicate health, Sister came to reside at the Mother House, but was able to help in light duties until stricken with total blindness over two years ago. She finally suffered from recurrent cerebral thrombosis and loss of speech which left her entirely incapacitated until released by death. With never a murmur of complain Sister M. Romana bore her heavy cross bravely, and we trust her patient endurance in her sufferings during her long illness have merited for her the reward of a blissful eternity.

Her niece, Miss Anna Mulligan, was most faithful in visiting Sister regularly until her death. On the previous Sunday when she came to see her aunt she saw no apparent change in her condition. The following Tuesday she seemed weaker although there was no cause for alarm, but towards midnight Sister M. Laurina noticed an immediate change which was the final summons; Sister died at five minutes past twelve o’clock, Wednesday morning.

The funeral was postponed until Saturday, so that her nephew, Reverend G. Mulligan, pastor of Estevan, Sask, could be here for the funeral and to offer the Mass for his aunt. His Grace, Archbishop O’Sullivan officiated at the Libera. Burial took place in St. Mary’s Cemetery. Father Mulligan recited the prayers at the grave. R.I.P.