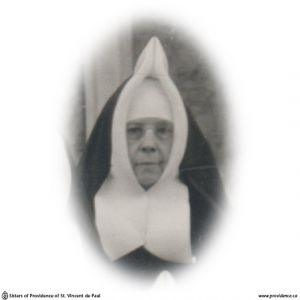 Elizabeth Canning entered the novitiate at the House of Providence from North Adams, Mass. while our sisters were still in charge of the mission at Holyoke, Mass. Four years later, when that mission separated from Kingston and became an autonomous Motherhouse, the sisters were given the option of returning to their native diocese or remaining in the Kingston Motherhouse. Mr. Canning was advised to go to Kingston and bring back his daughter. He came, but Elizabeth, then Sister Mary Rosalia, refused to leave the community in which she had made profession two years previously. For fifty-seven years she remained a loyal dedicated member of the Kingston Sisters of Providence, and for a term served on the General Council.

Almost all these years were spent at the House of Providence, Kingston. Here she was in charge of the “boarders” – men and women who desired to live a semi-retired life in a religious atmosphere, and young women from outside the city who were working or attending High School or Queen’s University. To these young persons Sister Mary Rosalia was a kindly second mother, and her prayers and example must have been efficacious, for several of her boarder’s later embraced religious life.

It was said of Sister that no one ever heard her speak an uncharitable word. She spent a brief period in St. Francis hospital, Smiths Falls, and while it is recorded that she did not enjoy the busy life of a hospital, she still found something good to say about the place with its spacious grounds on the edge of the town: “It was a good place to bleach clothes.”

She celebrated her Golden Jubilee of profession in 1940, and not long afterwards she suffered a fall which left her unable to leave the infirmary for her last few years. It was a great privilege for her to have as infirmarian during her illness her niece, Sister Mary Grace Canning, and she enjoyed having the sisters who came to the Motherhouse for retreat visited her.

But as the summer of 1945 was drawing to a close, she remarked to Sister Mary Grace that this year she did not feel equal to having visitors. On August 8th she sat up for a while in her chair, as usual, but in the evening complained of discomfort around her heart. Although she had received the Sacrament of the sick a short time previously, Sister M. Grace called the chaplain and he anointed her. She was fully conscious, and within an hour’s time (about 10.00 p.m.) after a few words to Sister Mary Grace she breathed her last.