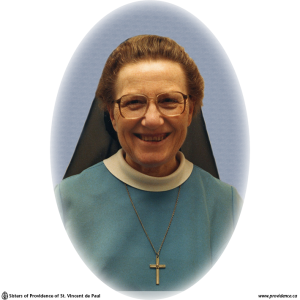 Marie Louise Andries, born on January 17, 1924 in Deloraine, Manitoba, was the youngest of eleven children of Marie Heavens and Charles Andries. Unfortunately, her mother died on February 19, 1924 and so she was raised by her uncle and aunt whom she called Papa and Mamma and her own father she addressed as father. These three people were very dear to her.

She entered the Congregation of the Sisters of Providence of St. Vincent de Paul on February 18, 1945. Following her First Profession at which time she received the name, Sister Mary Rosaria, she was missioned to Newmarket as housekeeper of the convent. She then went to St. Joseph’s Auxiliary Hospital in Edmonton where she was a supervisor of the senior citizens area. Her next move took her to Athabasca, Alberta to work with high school girls in residence at Rosary Academy. From 1952 – 1959 she went to Belleville where she studied and taught music. Between 1959 and 1991 she taught private piano lessons and some school music in Belleville, Picton, Chesterville, Gananoque and Kingston. In 1963 she obtained a Supervisor’s Certificate in School Vocal Music. In 1978 she obtained a Music Teacher’s certificate in Piano from the University of Western Ontario. After a sabbatical from 1991 – 1992 in Arnprior at the Galilee Institute of Personal and Spiritual Renewal, she took Pastoral Care training. She ministered as a pastoral visitor and continued to teach private piano lessons until 2010.

She was a quiet, prayerful person with a great devotion to the rosary and the Divine Mercy. She loved her family and enjoyed her visits with them and they with her.

Sister Mary Rosaria was called home peacefully to her loving God on December 15, 2022. The Mass of Christian Burial, held in the Chapel of Mary, Mother of Compassion, Providence Motherhouse on December 22, 2022 was presided over by Rev. Sebastian Amato. The homily was delivered by Sister Una Byrne.