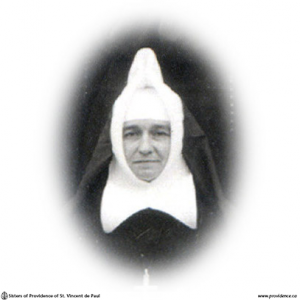 Soon after profession Sister was appointed Secretary at St. Vincent de Paul Hospital, an office which she faithfully fulfilled for many years with marked ability and success. As Local Superior she spent six years at St. John’s Convent, Gananoque, when that mission was first opened.

Returning to St. Vincent’s she gladly resumed light duties and responsibilities, which her health would permit. Finally as an invalid she was subject to years of suffering and privation in spite of the care and devotion of her Sisters in religion. Here where her last days were spent, she was a helpless invalid, both physically and mentally, a sad contrast to her former activity of body and mind.