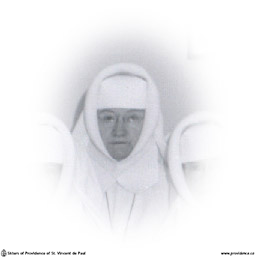 Sister Mary Rose of Lima died March 29th in Providence Hospital, Moose Jaw, Good Friday afternoon, exactly at three o’clock. The hour was remarkable in so far as it was a reminder of that first Good Friday, and like the good thief who “stole Heaven” it is to be hoped that Sister M. Rose of Lima, so long ill with unsolved problems – spiritual and otherwise – heard the same sweet words of Christ: “This day thou shall be with me in Paradise.”

Irene Marie Vos was born in Strome, Alberta, into a large family, daughter of the late Henry Vos and Catherine Slattery. In Edmonton she got to know our Sisters and decided to apply for admission to the Community; she was accepted as a Postulant on February 10, 1940. After her profession in 1942 she spent some time assisting at St. Joseph’s Vocational School in Winnipeg, and in 1945 she was sent to St. Mary’s Hospital Training School, Montreal, where she graduated as a nurse in 1948.

After one year in Smiths Falls Hospital she was assigned for duty to the West, and spent the remaining years of her religious life almost entirely in her native Alberta. Sister was a pious soul, but restless with endless worries of conscience which left her disturbed in mind. She was changed from one house to another, was given psychiatric treatment, etc., but nothing seemed to effect a cure or give more than temporary relief – not even the best of direction which she sought and had at her disposal in order to help her if possible.

A change to St. Anthony’s Home in 1953, in new surroundings it was thought, might give her a new outlook, but here she was no better. She was admitted for treatment to the Saskatchewan Hospital, Weyburn, hospitalized there for a few months and gave signs of improvement. She was then transferred to a Sisters’ home in charge of the Grey Nuns in Forget, Sask. Finally she became ill and her physical condition acute, it was then discovered that Sister was suffering from cancer.

As soon as arrangements could be made she was taken back to Moose Jaw, and once again she was glad to be with her own Community at Providence Hospital where she received every care and attention for soul and body during the last month of her earthly life.

On Holy Saturday the remains were taken to St. Anthony’s Home, where the funeral and Requiem Mass were held on Easter Monday. She was buried in the Community plot, St. Joseph’s Cemetery, Moose Jaw. Relatives and members of her immediate family from Alberta were present at the funeral.