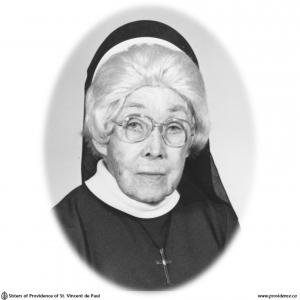 Ann Whalen was born in Hungerford, Ont. on January 8, 1897, and was baptized on January 24. She was one of fourteen children born to Sara McGrath and William Whalen.

At the age of 15, Ann Whalen wanted to enter the Congregation of St. Joseph but was told that she was too young. While attending high school in Tweed, she boarded with the Kinlin family and it was during her stay there that, Bridget (Sr. M. Anna) and Mary Elizabeth (Sr. M. Pascal) Kinlin were getting ready to enter the Sisters of Providence. At that time, Sister M. Aloysisus was visiting the Kinlin family and told Sister Mary Rose that she was not too young to enter the Sisters of Providence. After speaking to her confessor, she wrote her letter asking to be admitted to the Congregation, was accepted, and entered on December 8, 1912. Her sister, Sister M. Clarissa (Sarah), deceased, followed in her footsteps and entered the Sisters of Providence on August 31, 1921.

Following her Profession on January 21, 1915, at which she took the name of Sister Mary Rose of Viterbo, she went to Maryvale Abbey, Glen Nevis, to obtain Ontario standing for entrance to Normal School.

She began her teaching career in 1918 and taught elementary grades until her retirement in 1967. She was a very capable and talented teacher; she was very artistic and on entering her classroom you felt you were visiting an art gallery as the blackboards were always beautifully decorated, the envy of all beholders; she was the personification of neatness both in her personal appearance and in her surroundings – nothing must be out of order.

Sister Rose loved the country and often took long walks, returning with wild flowers that she picked for the chapel where she spent much time in prayer. While in Batawa, she daily left the convent with the mail bag to visit the local Post Office and the workers there loved td see “the little sister”.

To the Sisters with whom she lived, she was a very generous person and always found time to share her generosity in helping others. In her retirement years, she loved playing cards and got much enjoyment from knitting and many folks were the recipients of her warm cozy slippers.

A tribute to Sister M. Rose by one of our sisters was: “She was a dedicated religious and a true Sister of Providence of St. Vincent de Paul.