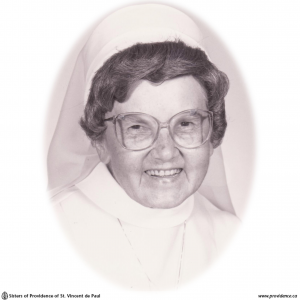 Cecilia Mary Onyski, eldest of seven children, was born in Ottawa on March 25, 1914, to Stephen Onyski and Anna Klym who had immigrated to Canada from Poland.

From Ottawa, the family moved to Brockville where Cecilia Mary attended the Brockville Collegiate Institute and the local Business College. Seeking employment at St. Vincent de Paul Hospital, she worked as receptionist and switchboard operator for three years. One Sister recalls memories of the serious, gentle young girl as a model of simplicity who seemed to derive inspiration on observing the example of the Sisters. Later on, finding their way of life so compelling, she decided to seek admission to the congregation and entered on December 8, 1933. Admitted to Profession on March 19, 1936, Cecilia Mary took the name of Sister M. Ruth.

Being assigned to work in the Business Office, Admitting and Switchboard Operator at St. Francis General Hospital, Smiths Falls, Providence Hospital, Moose Jaw, and St. Vincent de Paul Hospital, Brockville, she served happily and endeared herself to all she met.

To prepare herself to work in Medical Records, Sister took a two year extension course in Toronto and was then assigned to that Department in St. Vincent de Paul Hospital where her expertise enhanced the Department’s efficiency. Later Sister spent some time in care of the elderly at St. Anthony’s Home, Moose Jaw; she was also assigned as Pray-er for our Providence Associates and the Renew Program.

After taking a pastoral care course in 1986, Sister joined her long-time friend, Sister Mary Josephine, as a member of the Pastoral Care team in Brockville. Known for her compassionate and caring nature, Sister Ruth enjoyed being with the sick and their families. On call around the clock, Sister visited the medical and surgical wards and intensive care at least once daily and, whenever a need arose, especially to be with the terminally ill patients. In this work, it seemed evident that, not in spite of but rather because of, an obvious debilitating bone condition, Sister made such an impact on bringing the good news of God’s love to them.

Sister was a woman whose prayerful and gentle presence spoke of an awareness of being a part of the revelation of God’s Spirit in the world. It was her awareness of the beauty in others that made them feel transformed even in their illness and pain. She did not seek to have her words inscribed in stone – her kindness, her warmth, her hospitality are inscribed in the hearts of all those with whom she came in contact. Sister Mary Ruth brought the light of faith and the love of God a little closer to her family, her sisters, her friends and the sick.

Sister M. Ruth died suddenly on November 19, 1991, in Brockville, in the 59th year of her religious life. Archbishop Francis J. Spence, accompanied by several priests, presided at the Funeral Mass. Rev. Philip Horrigan aptly compared her to the biblical Ruth during this homily.