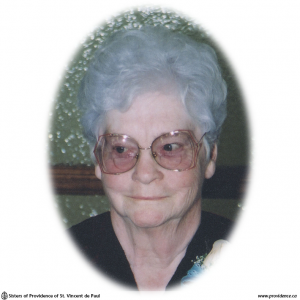 Mary Winnifred Ryan was born on March 8, 1923 in Cochrane, Ontario to Michael Joseph Ryan and Maude Joyce. Her twin sister died at a young age leaving Mary to grow up with her three older brothers, John Francis, Michael Joseph and Bernard. When se was a child she lived in Cochrane, Sudbury, Timmins and Montreal because her father, who was civil engineer, was posted to different places.

Mary met the sisters of Providence through Mother Anselm, whose sister was a friend of Mary’s mother. As a child, Mary lived with Mother Anselm’s sister in Cochrane for three years while her parents were in Arizona.

After finishing high school in Montreal, Mary worked for a year and a half as a bilingual secretary at the Windsor CPR Station in that city. For six and a half years she belonged to the church bowling league, the Children of Mary and worked as a volunteer at St. Willibrord and St. Thomas More Parishes.

Mary entered the Novitiate of the Sisters of Providence of St. Vincent de Paul on February 2, 1943. After First Profession, she went to Tweed for one year to teach private piano lessons. From there she went to Batawa, St. Michael’s convent, Belleville, Gananoque, Providence Manor in Kingston, Picton and Perth to give private piano lessons. At St. Joseph’s Convent in Belleville Sister Mary was the music teacher and the organist for the parish. When she returned to Batawa in 1966 she taught school music and private piano lessons. In 1970 she returned to Perth as music teacher for the next ten years. In 1980 she went to the Motherhouse to help with the switchboard and to be organist. One year later she was sent to Brantford where she taught music in five schools and was the church organist. When she returned to the Motherhouse in 1983, she offered to be organist and director of the adult and children’s choirs at Blessed Sacrament Parish until she retired in 2003.

Sister Mary was a gifted woman who used her gifts to help others in any way she could. Through her gift of music she brought joy and fun to many situations. She loved to drive and was always ready to make a trip to and from the airport with the Sisters.

The Mass of Christian Burial, held in the Chapel of Mary Mother of Compassion, Providence Motherhouse on July 4 was presided over by Most Rev. Francis J. Spence, Archbishop Emeritus of Kingston. Rev. Msgr. Don Clement, homilist, and several members of the clergy were in attendance.