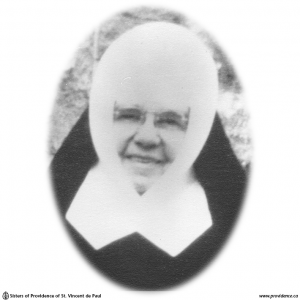 Sister Mary Scholastica was born in the parish of Kilmactique, in the diocese of Achrony, Eire, one of the eight children of Thomas Brennan and Bridget Healy. The atmosphere of that home may be judged by the fact that four of the eight children devoted themselves to the service of God in religion.

Margaret Mary, after elementary schooling, attended the Metropolitan School of Art in Dublin where she specialized in lace making and designing. She then taught these skills for a few years in the famous Benada Abbey School at Tubbercurry, in County Sligo.

In 1909 she left her native land to enter the Congregation of the Sisters of Providence, Kingston, where an elder sister, Sister Mary Bonaventure had made profession in 1908, and where her cousin, Mother Mary Scholastica MacDonell, as Superior General had died in 1907.

After Sister’s profession in 1911, she was assigned to office work in St. Vincent de Paul Hospital, Brockville, and later St. Mary’s of the Lake, Kingston. Her next appointment took her to the Western provinces and she was stationed at Rosary hall, Edmonton, and then at St. Joseph’s Vocational School, Winnipeg. The General Chapter of 1933 elected her General Secretary, a post she occupied for thirty-two years.

The new Motherhouse had just been opened, and so the annals of Heathfield’s first three decades are the work of Sister Mary Scholastica. An artist to her finger tips, she kept records that not only interest the reader by their content, but as well delight him by their exquisite appearance. And throughout her years as office-worker, her hobby was her early handicraft, designing and fancy needlework. Many of the linens and vestments of the chapel bear the mark of her taste and her skill.

The last year of her life was one long period of suffering, although she was confined to hospital or infirmary bed for only about two months. Doctors did not seem to be able to diagnose her illness, and it was not until October 1965, when she was admitted to hospital for tests that exploratory surgery was done and that it was discovered that she was suffering from cancer of the liver. The disease had advanced so far that medical skill could do nothing for her. She returned to the Infirmary and for the remaining weeks of her life suffered from extreme weakness and inability to eat, but she was spared intense pain. On December 31, she was stricken with a heart attack, received the Last Sacraments and was taken back to the hospital where she died on January 2. Mother Mary Lenore, Superior General, Mother Mary Modesta, Assistant, and Mother Mary Alban were with her when she breathed her last, along with Sister Taggart of the Hotel Dieu who had given her untiring care.

Her funeral Mass was offered by a cousin, Father Robert Albert of Bridgeport, Connecticut, assisted by Father Flurey, chaplain of Heathfield, and Father Keyes. His Grace the Archbishop was out of the city.

Sister Mary Scholastica is sorely missed at Heathfield. Her kindly manner and ready Irish wit made her loved by old and young, and the faith she had received in that home in County Sligo had grown ever brighter through the fifty-seven years of her religious life; we have every reason to hope that she would not be long deprived of the Beatific.