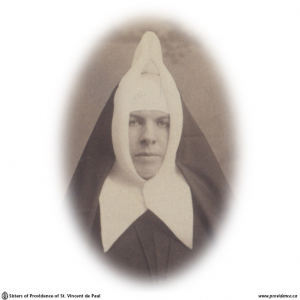 This brief sketch describes the acts and character of a magnanimous woman in the person of Reverend Mother M. Scholastica, whose necrology was not recorded until this late date.

Mother Scholastica, known in the world as Bridget McDonnell, was born in Ireland, of Irish parents, strong in that faith with which the Isle of Saints endows her children. She attended the schools of her native place, and obtained a liberal education.

Having arrived at the age of womanhood she sought fortune in widest America, and lived there midst near and dear friends in the city of Springfield, Mass. After the lapse of seven years, Bridget returned to her home in Ireland, bringing joy and happiness to her beloved parents, and sisters. She remained under the parents’ roof ministering to the family wants, and although joyously acquitting herself of this privileged duty she felt un accountable yarning to return to Springfield again. God was thus leading her along these lines to the home he had prepared for her in the Providence, Kingston.

Presumably she had acquainted her parents of her prospective plan of entering a religious community. They, would, no doubt have preferred her to enter a community near home, but being animated by a strong spirit of faith in the existence of God everywhere, put no obstacle in her way.

Bridget returned to her American friends and with them abode a few years. Although liberty-loving America had many attractions for her, yet the germ of a religious vocation was gradually developing itself. Urged on by the advice of faithful companions, she yielded to the impulse of seeking admission into some local community. Accordingly she visited the House of Providence, Holyoke, Mass. and there obtained an interview with the Mother Superior who was on her visitation in that city. The interview was rather disheartening as she received no encouragement or definite hope of being received. This plan the Superior took to try her earnestness rather than deny her admission. For a time she grew independent, feeling if she were refused in one place, there were other opportunities elsewhere. Her companions encouraged her to make a second appeal, holding out that the first refusal was only a trial. On the strength of their suggestion she repeated her request, which was this time favourably granted.

In 1882 she came to the House of Providence, Kingston, and was there received as a candidate for the Novitiate. What gratitude filled her heart, and what thanks she returned to God for such a great favour. She gave herself unreservedly to the duties imposed upon her, fulfilling each with a joy and alacrity which were evident in her loving sympathy for the sick and poor.

In 1883 having passed the probationary term requisite before taking of the Holy Habit, and having shown a good spirit and a good will, was without hesitation admitted to this sacred function. In 1884, her Noviceship having reached the superlative, was through earnest solicitations allowed to enter upon the most sacred duties of a life of poverty, chastity and obedience. Without any apprehension of non-compliance with these holy obligations, Sister McDonnell was permitted to consecrate her life to God in the faithful discharge of these triple engagements.

In 1887 she was one of the first four Sisters who formed the nucleus of the flourishing mission in Brockville. In 1889 she was appointed Local Superior of St. Vincent de Paul Hospital, Brockville. Under her able management the works of this Institute were conducted in an admirable way, thus giving an impetus to future advancement.

She held the office of Local Superior until 1896, when she was elected Superior General of the order. She assumed the duties of this office with no weak apprehension of confronting difficulties. She was a very open, broad-minded woman; full of zeal in the interests of her community, but not all appreciated the transports of her zeal. She was reproached by some with being impetuous and disturber of their peace of mind. Those who felt their own lives rebuked went so far as to denounce her to the Archbishop. But this noble-minded woman was inaccessible to the petty miseries that affect ordinary souls. Like the great apostle, she triumphed over every evil by good, and drank the bitter draught with an equanimity of mind and a cheerfulness of heart which were more the quality of a saint than the virtue of a mere human being.

Mother Scholastica relaxed not in the accomplishment of her duties, nor did she limit herself to the sanctifying of her community alone. Each year finds her engaged in some new enterprise. The building of the Church of Our Mother of Sorrows, the extension of the laundry, and installing of machinery in that department, the opening of hospital in Smiths Falls, the school missions of Belleville, Trenton and Prescott, are standing memorials of the deep interest which she manifested for the greater honour and glory of God and the uplifting of her community.

The beauty of Mother Scholastica’s life consisted in her humility. She never opened her heart to the poison of pride. She rather considered herself as the least of all. Her charity to the poor and sick was very great. She even rendered them services the most repugnant to nature. It was because she saw in these suffering members Our Divine Lord that she was enabled to conquer natural feelings. It was her belief that he who is deprived of health and fortune needs something besides the most comfortable hospital room. He needs a pitying heart, a tender sympathy, a true friend. Such wee the characteristics of Mother Scholastica.

Mother Scholastica was now slowly approaching failing health. A sore knee weakened her constitution, and His Grace, the Archbishop, having noticed that she was labouring under some indisposition, ordered her away for complete rest, which she gladly accepted, and after a few weeks returned. Her health was apparently much improved, but alas, the improvement was not a permanent restoration. A painful malady in her foot caused her much inconvenience. She was ordered to consult a doctor in Brockville, who pronounced the case a stubborn disease to check, and strongly recommended her to consult a celebrated specialist in Rome, New York. She apprised His Grace and the Community of the doctor’s opinion, and the Archbishop ordered her to Rome, New York, without delay. She repaired to that distant city, taking Sister Mary Catherine as companion, and having met the specialist at the appointed hour in his office, he examined her foot and diagnosed the malady as “carcinoma”, at the same time he informed her that the operation might prolong her life, but should it appear again it would attack some vital order.

A summary of the case was submitted to the Archbishop and Council who encouraged her to undergo the operation. She submitted obediently to an excruciatingly painful operation without complaint. When the wound had healed sufficiently to allow her to leave the hospital it was pitiful to behold her moving along on crutches. Great was the grief of the Community at seeing their beloved Mother General subject to such pain and misery.

Animated with courage and trust in Divine Providence, Mother Scholastica attended to the duties of her office for three years longer. At this time the disease assumed another form, attacking her internally, which confined her to bed in the early part of January.

The gladness of the Christmas and New Years festivities were soon to be overshadowed by the serious illness of our beloved Mother General, who during the holiday season had bravely sacrificed every personal comfort rather than mar the happiness of the community and all who depended on her maternal solicitude for cheer and encouragement. On January 16th, 1907, her condition had become so alarming that acting on medical advice she was ordered to treatment in hope of restoration, but the malignant disease baffled the most skilful efforts of the best physicians. Her Sister, Sister Mary Vincent, Superior of St. Frances de Sales Hospital, Smiths Falls, was summoned, and her early and cherished brother, Rev. Father McDonnell, P.P. of Killasser, Ireland. In answer to a cable he expressed deepest regret at not being able to attend the dying bedside of one he loved dearer than his life.

Her sufferings were severe. Not a murmur escaped her lips. Persevering to the end in prayer, she edified all about her by her spirit of faith and perfect resignation to the Will of God. She was consoled by special spiritual favours during her brief illness, and encouraged by many visits from the Archbishop and priests of the diocese who came to sympathise and aid with their prayers, our worthy Mother Mary Scholastica, who for twenty-five years of faithful service had rendered many kindnesses to the poor and suffering of their parishes.

His Grace united with the Community in powerful supplications to heaven to prolong the precious life of our zealous Mother, and for this purpose celebrated Holy Mass in her room on the feast of St. Scholastica. The little altar being erected on the same spot where the first Mass was offered by His Lordship, Bishop Horan, at the foundation of the House of Providence , in 1861. The great privilege was appreciated, but evidently God willed His faithful Spouse have something infinitely better than the feasts of earth, for the final summons came the following day at 3 p.m. when her soul departed this life purpled with the Precious Blood of Jesus through the final and numerous absolutions bestowed in her last moments.

Solemn Requiem Mass and funeral services were held at 9 o’clock Thursday morning, celebrated by His Grace, Most Rev. Archbishop Gauthier, assisted by Monsignor Masterson of Prescott, Dean Murray of Brockville. The sanctuary was filled with priests from Cathedral and diocese. Funeral oration was delivered by Reverend Doctor Salmon of Morrisburg.