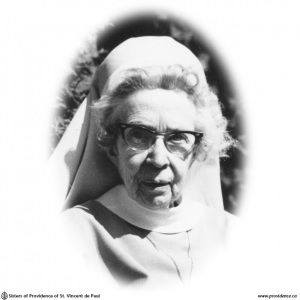 St. Joseph’s month had nearly ended when God called Sister M. Sheila (Rose Helen Quinn) to Himself. A devoted client of St. Joseph, Sister had been born in Tweed, Ontario, on August 17, 1896, the daughter of James Quinn, of Armagh, Ireland, and Catherine Collins of Tweed. There were ten children in the Quinn family. Only two daughters, Agnes (Mrs. N. Munroe) and Jean, both residing at Tweed, now survive.

Sister M. Sheila obtained her early education in Tweed, then spent some years at St. Joseph’s College, Toronto, studying toward a licentiate in music. On her return home, she worked in her father’s General Store in Tweed.

Sisters of Providence were friends of the Quinn family and Sr. M. Hildegarde, in particular, seems to have impressed Rose.  In January, 1924, Rose asked to join the Community and in 1925 left all to enter the Novitiate at the House of Providence, Kingston.

After profession in 1927, Sister M. Sheila was missioned to St. Mary’s Convent in Chesterville as music teacher. Subsequently, she taught music in Lancaster, Glen Nevis, Tweed and Kingston and was Superior of St. Malachy’s Convent, Montreal. During the first twenty years of her religious life, Sister continued her studies in music adding to her ability as a teacher and her skill as an organist. The longest assignment of her religious life was the final active one spent at Providence Manor, where she devoted her talents and energies to instructing a large number of students in her music studio and teaching school music in St. John’s School.

Sister M. Sheila possessed a quiet, gentle, generous nature, was always cheerful and very faithful to her community and religious duties. She was deeply interested in the residents of Providence Manor and enjoyed their festivities, frequently playing for them at their parties.

In 1979 her frail health caused Sister to retire to the Marian Infirmary where she spent the last years of her life in suffering and prayer, awaiting the final summons, which came quietly on the evening of March 30, 1982, in Hotel Dieu Hospital, where she had been taken the previous day.

The funeral Mass was concelebrated on April 2 by His Grace, Archbishop Wilhelm, Fr. Dan Ryan, chaplain, and Fr. Clifford Rushman, S.J., brother of Sr. M. Hildegarde. As was pointed out in the homily, our music teachers have the great privilege of instructing the universal language, a source of much joy. Through their work, they give to their students an appreciation of the finer things of life and elevate these to a spiritual dimension. Sister M. Sheila lives on in her pupils and their accomplishments and in Christ.