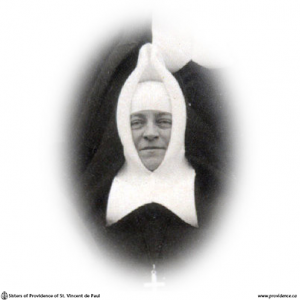 In the evening of September 30, 1891 before the hour of prayer, two apparently little girls arrived at the Novitiate in company with their mother and sisters to enter the Novitiate. They were bright with the gladsomeness of youth. They were the daughters of Mr. and Mrs. Daniel and Margaret Corrigan of Kingston. Following the advice of their confessor, the Rev. J.P. Keogh, they had at the close of the school term in June, asked and obtained permission for this initial step.

The subject of our sketch, Bridget Ellen, or as she was familiarly called Jettie, was born April 22, 1875, and was therefore but a few months over sixteen years of age. In due time in August 15, 1892, she was clothed with the Holy Habit and on November 4, 1895 pronounced her Religious Vows.

The beautiful frankness and gaiety which she manifested in the beginning never changed. She was very happy, bright and cheerful. She made the best of circumstances, though capable of many things, she was content with the work and place assigned her.

In her early years she was employed in the dispensary and kitchens, also the wards showing in all good judgment, kindness and charity. While housekeeper at St. Peter’s Convent, Trenton for a couple of years, she was a source of much comfort, consolation to the Superior, the late Mother M. Edward, who was then in her declining years. After Reverend Mother’s death, she was recalled and did duty in many offices. She very creditably filled the office of Sacristan at the Mother House [and] St. Mary’s Cathedral for several years. In 1914 she was appointed Superior of Maryvale Abbey, Glen Nevis, and for seven years she managed the affairs of that Institution well and successfully. Recalled to the Mother House she was given charge of the women’s ward. It was here she showed signs of failing health.

On the morning in the summer of 1925, she came into the infirmary in her “night attire” and saying that she could not speak alright. She attempted to talk, but the mouth and face seemed drawn to one side. She laughed over it, but though the face recovered its normal condition, it was observed that her whole side was affected. It was concluded she had a slight stroke of paralysis. She was a year or more in the Infirmary.

Later on, she went to St. Vincent de Paul Hospital, partly for treatment. She recovered somewhat, was given charge of the chapel.

The sudden illness and death of her eldest sister Katie on April 5, in the Hotel Dieu caused her great affliction, as she was sick in bed and unable to come. Later she came home, and though able to go about, she was poorly.

Early in October 1930, she took very ill, and for a long time suffered much from vomiting. On October 13, her brother Rev. Father Corrigan was sent for. He came, and prepared her for Death. She lingered on but was very weak. Saturday and Sunday she was able to receive.

The Superior General’s feast was to open on Monday October twentieth at nine o’clock, but at that time the exterior bell was ringing for prayers for the agonizing. The prayers were continued until 12.30 when the soul of our beloved Sister Mary Stanislaus took her departure.

A Requiem High Mass was offered the next day by Reverend Father Corrigan, after which he addressed the Sisters a few words – thanking them and expressing how edified he had been during the past few days to thank you again for the prayers and a affection that he observed shown to his dying sister.

Of her family who survive besides those mentioned above, she has two brothers, Dr. John A. Corrigan of Denver, Colorado, and Dr. Leo Corrigan of Rochester, N.Y. who with Mrs. Corrigan attended the funeral.