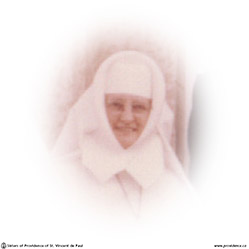 Mary Stephane was born in Russia on October 23, 1908, one of the ten children of John Baumann and Elizabeth Mitlafsky. The Baumann’s immigrated to Canada in 1913 and settled on a farm at Claybank, Saskatchewan, in the vicinity of Moose Jaw. They became acquainted with the Sisters at Providence Hospital and Veronica worked at the hospital for a short time. On the recommendation of the Sisters and of Reverend F. W. Hill, C.Ss.R. she was received into the novitiate at the House of Providence in August, 1929.

After profession as Sister Mary Stephane she served a few years in the Kingston houses, but the greater part of her religious life of forty-five years was spent on the Western missions – Moose Jaw, Vancouver, Athabasca, Edmonton and finally Camrose, where she was stationed for eleven years.

Her talents were many and she hid none of them. She was an artist according to the Oxford definition of that word, “One who makes his craft a fine art”. Whether it was in cooking, gardening, leather work or painting landscapes, she was a creative genius.

Poor health plagued her for many years. She suffered from diabetes difficult to control, arthritis of the spine, and finally a weakened heart. Yet in spite of these handicaps she carried on her various activities. During her last four years, which she spent at the Mother House, she painted several pictures, looked after the flowers and had a good-sized vegetable garden.

In April 1974 she was hospitalized for five weeks with a heart attack and never regained even her normal limited strength. The arthritis became more and more painful, and treatments at St. Mary’s of the Lake Hospital gave her no relief. Her doctor decided that she could no longer endure the pain, and that surgery on her spine was necessary, even though it entailed a risk. She came through the operation on October 4th and seemed to be doing satisfactorily; she was able on October 7th to sit up in a chair for a brief period. But on October 8th Sister Gaffney called from Hotel Dieu to say Sister M Stephane had suffered a heart arrest. Before Sisters from the Mother House reached the hospital, a second message came that she had died. While the suddenness of the death was a shock to us, it was not a surprise, and we are grateful that she was, we hope, spared further suffering.

His Grace offered the Eucharistic celebration for the repose of her soul on October 10th.  Of the five surviving members of her family – one brother and four sisters – two came for the funeral, Tony from Saskatoon, and Mary from Moose Jaw. Also present were a nephew from London, Ontario, and a niece with her husband and four daughters from Belleville.

During her last years at Heathfield, Sister had been one of the group who visited prisoners at Collins Bay Penitentiary. The chaplain of the institution, Father Crawford, C.Ss.R., and one of the ‘boys’ came for the funeral Mass; and a card signed by twenty-four residents announced that a Mass would be offered for Sister Mary Stephane on October 20th in the chapel of the prison.

We trust that He Who said, “I was in prison and you came to see me” has already invited Sister Mary Stephane to “take the kingdom prepared for you from the foundation of the world”.