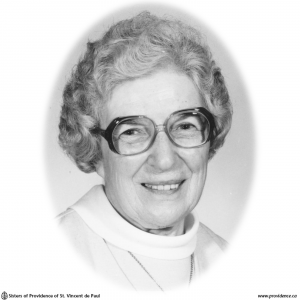 Sister Mary Teresa was born at St. Francis Hospital in Smiths Falls. The eldest daughter of Patrick and Helena (Sloan) Cole, she was baptized Zelda Anna Camella Cole. Sister grew up in Smiths Falls and attended elementary and secondary school there except for two years when her family moved to Windsor. She was taught by the Sisters of Providence in Smiths Falls and the Ursuline Sisters in Windsor.

On August 15, 1934 at the age of 17, Sister Mary Teresa entered the Novitiate of the Sisters of Providence of St. Vincent de Paul in Kingston. Following her religious profession two years later, Sister Mary Teresa attended Ottawa Normal School and from there was assigned to teach high school at Maryvale Abbey in Glen Nevis for one year. There, Sister Mary Electa was her companion and mentor. In 1939 she joined the staff of St. Michael’s High School in Belleville, and except for two years (1945-1947) spent in Glen Nevis, she was associated with Catholic secondary school education in Belleville until her resignation in 1978. She served as principal of St. Michael’s High School and continued as principal of Nicholson Catholic College which opened in 1961. Sister received a Bachelor of Arts degree from Queen’s University and a Masters Degree from the University of Ottawa. She also did post graduate studies at the University of Windsor and at the Catholic University of America in Washington. In 1976 Sister received the Sir MacKenzie Bowell Educator of the Year Award in recognition of her dedicated service in the Belleville area. She maintained contact with the students as a classroom teacher of English and Latin and formed many life long friendships. In her role as teacher and principal she served as an academic and spiritual inspiration to the students and teachers on her staff. Sister was also a recipient of Queen Elizabeth’s Silver Jubilee Medal.

From 1977 – 1985 she served as First Assistant to the General Superior on the General Council. Following a sabbatical year, during which she took courses at St. Paul’s University in Ottawa, she went to Providence Manor as Coordinator of Pastoral Care. After leaving this position, she continued to visit the residents on a daily basis as a volunteer with the Spiritual Care Department.

During the past year when her health began to decline, she became a resident of the Marian Infirmary at the Motherhouse. On July 31, 2007, Sister Mary Teresa was called home to her loving God with her own sisters, Peggy and Emily, and several of her Religious Sisters at her bedside.

She is predeceased by her parents and her brother, Raymond. She is survived by her sisters, Emily Byck and Peggy (Joseph) Dwyer all of Niagara Falls, Ontario.

The Mass of Christian Burial held on August 3, 2007 in the Chapel of Mary Mother of Compassion, Providence Motherhouse, was presided over by Most Rev. Brendan M. O’Brien, Archbishop of Kingston, assisted by several members of the clergy. Rev. Charles Gazeley, a former faculty member of Nicholson Catholic College, was the homilist. Her two sisters and several nieces and nephews were in attendance as well as were many of Sister’s former students.