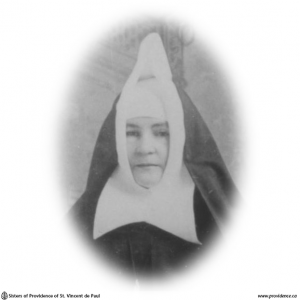 On September 18, 1934, Sister Mary Teresa (Margaret Mangan) passed to her eternal home at the House of Providence, Kingston.

Sister was a zealous and successful teacher, having taught in the Separate Schools of Perth, Belleville, Brockville and Portsmouth. On retiring she spent some time as Superior of St. Mary’s of the Lake.

Besides teaching, Sister exhibited a talent for the fine arts, music, painting and fancy work. These latter interests took up much of her time in later years.

While at Portsmouth her health began to fail, and in the hope that a change and rest might benefit her, she was sent to the Western missions in Sask. and Alberta. After a year’s absence, there was no improvement in her condition, and her mental faculties were gradually becoming more impaired.

With Mother Gabriel as her companion she celebrated her Golden Jubilee in 1933.

Sister was prayerful and earnest observer of the Rule. Death could not have found a religious, faithful as she was, unprepared. So after years of declining health it did not come unexpectedly.