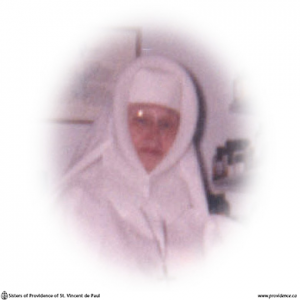 For the first time in the history of the Sisters of Providence a double funeral took place at the Motherhouse, “Heathfield” Kingston. On March eighth, within a few hours, two Sisters were called by death – Sister Mary Pius, a venerable religious, who had spent fifty-seven years in the community, the last ten in a sick bed, and Sister Mary Teresita who had been on active duty until three days before her death.

Sister Mary Teresita (Mary Jane Kennedy) daughter of Allan Kennedy and Christine Macdonell Kennedy, was born in St. Raphael’s, Ontario, and was admitted to the Novitiate of the Sisters of Providence on the Feast of the Sacred Heart, June 1920, and made profession in 1922. She then entered the training school for nurses at St. Vincent de Paul Hospital, Brockville, and after graduation served in the hospital of the community at Smiths Falls, Moose Jaw, Winnipeg, and St. Mary’s, Montreal. Because of impaired health she was obliged to give up hospital work in 1965, but for the past two years had been able to give valuable assistance at the Motherhouse.

Of the Kennedy family of ten, three embraced religious life. Sister Mary Eusebia, a Sister of Providence, is on the staff of St. Mary’s School, Trenton, and Sister Teresa Kennedy, a Religious Hospitallier of St. Joseph, is Superior of the Juniorate of her order in Ottawa. Other surviving members of the family are: Alex Kennedy, Donald Kennedy and Mrs. C. Macdonald of St. Raphael’s; J. J. Kennedy of Hull and Mrs. Irene Mahoney of Smiths Falls. Two deceased sisters were Mrs. George Daniels, of Monkland, Ontario and Mrs. Chas. MacDonald of Detroit. An aunt of Sister M. Teresita, Sister Mary Nazareth still mentally alert, in her ninety-third year, is a patient in the Marian Infirmary, Heathfield.