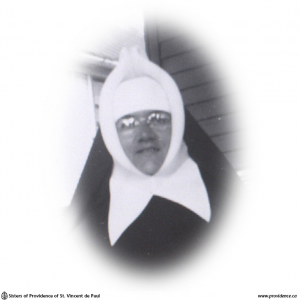 Sister Mary Thaddea died on Sunday morning, February 19, 1950 after an illness of about six months, due to a nervous break-down. Mother M. Anselm and Mother M. de Sales were with her reciting the prayers for the dying in the hospital for about an hour before she passed to her eternal reward.

She was born in Lanark County of non-Catholic parents. The family moved West and it was there Sister M. Thaddea received her early education. She taught school in Sask. For several years, then decided to become a nurse and graduated from Providence Hospital, Moose Jaw, in 1940. During her training she became a convert to the Catholic faith and was received into the church in 1939.

It was her great desire to become a religious and had her heart’s longing fulfilled when she was admitted as a postulant in January 1942. Following her profession in 1944, Sister was at first engaged in nursing and afterwards sent to teach at Maryvale Abbey, Glen Nevis. At the close of school in June 1949, she returned to Heathfield for the summer vacation, apparently in her usual health. In a week or so she became suddenly ill, suffering from a nervous break and had to be sent to hospital for treatment. She responded to the treatment and came home for a week but had to return for further care. She finally took pneumonia which was the cause of her death.

Sister M. Thaddea was talented, had a nice voice and was proficient at any work. With her experience she could have been a real asset had she been spared. Yet God in His wise Providence saw fit to direct her through a short and thorny path to her eternal crown. She was kind, charitable and generous and much beloved by her companions and Community. May her soul rest in peace.