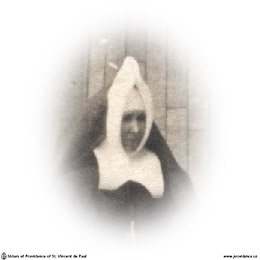 On March 7, 1938, Sister Mary Thecla (Rose Hamilton) departed this life at the House of Providence, Kingston.

After her profession Sister spent several years at the House of Providence. Later she went to the missions of Brockville, Belleville and St. Mary’s of the Lake. It was to her labours for the poor and the orphans that she distinguished herself. She was gifted with a generous disposition, and found no sacrifices too difficult, no labours too great that she might secure for her charges every comfort and happiness.

During her last illness, when death was daily expected, she received the last Sacraments of the church just one week before she died. It was her happy privilege to receive the last Absolution as few hours before her death from His Grace Archbishop O’Brien.

Rose Hamilton entered the congregation as a Tertiary Sister in 1900 and was known as Sr. Juliana Falconiere. Tertiaries were auxiliaries who performed domestic labour and were part of the Congregation from 1895 to 1907, when the program was phased out and they were invited to enter the novitiate. She entered the Novitiate on November 21 1907.