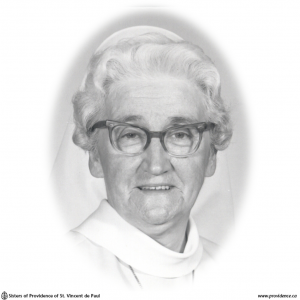 Born on a farm near Bancroft, Theresa was the youngest of six children born to the late Mr. and Mrs. John O’Brien. Martin is the only remaining member of Theresa’s immediate family. Theresa went to the country public school until grade nine. Her mother was not well and since Theresa’s sister was away working Theresa discontinued school and stayed at home to help her mother. Later, she worked outside her home in a couple of neighbourhood houses as well as in a restaurant. Her first contact with the Sister of Providence was when Sister M. Joseph, her cousin, came home for her first visit after her final vows in 1942. It was then that Theresa, at age sixteen, decided to enter the congregation of the Sisters of Providence. Theresa’s parents were very happy about her decision, but two of her brothers were much against it at the time. In 1945, after her first profession of vows, Sr. Mary Avila, as she was now called, was missioned to Arnprior for two years. Here, she cooked for the Sisters and studied music.

Sr. Theresa got her A.R.C.T. in 1954 and was a gifted musician and music teacher, mainly in Belleville and Picton. In 1993 Sister took a sabbatical in New Jersey but became ill and had to return to Kingston. In 1994 she was able to spend a three month semester at Galilee Centre in Arnprior.

For over the past twenty years, until suffering a stroke early in 1997, Sister Theresa was involved in Parish Ministry, visiting Nursing Homes, where she played bridge with the seniors and entertained them on the piano. Long after she had to give up this ministry residents would say, “Where is my old friend, Sister Theresa?” She was also involved in Church work, as well as her music ministry, which enhanced many liturgies. The morning when she died her parish priest commented that one of the altar candles suddenly went out by itself although it was not out of fuel and there seemed to be no reason for the flame to stop burning.

Sr. Theresa had a deep devotion to prayer and to her spiritual life. Her sense of humour and love of music endeared her to many. Her family, Sisters in religion, especially her cousin, Sister Joseph O’Brien, and many good friends loved her dearly.

Sister Theresa died at St. Mary’s of the Lake Hospital, Kingston, Ontario on February 15, 1998 in the 56th year of her religious life.

Rev. Msgr. T.J. Raby presided at the Mass of Christian Burial in the crowded Chapel of Mary, Mother of Compassion, Providence Motherhouse on February 17, 1998. The homily was preached by Rev. Harold O’Neill from Prescott. Father remarked on Sister Theresa’s wonderful sense of humour and quiet chuckle, as well as her generosity in sharing her musical talents which enhanced many liturgies, throughout the years.