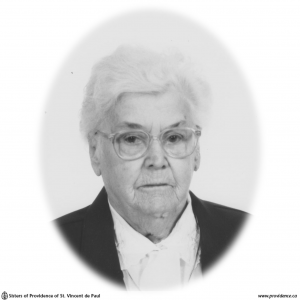 Mary Gertrude Doyle was born the second child of a family of five to Thomas Patrick Doyle and Ellen McDonald in Forest Mills, Ontario on March 4th, 1913. She was baptized sixteen days later in St. Charles Church, Read, and Ontario. Her elder brother, John, was three at the time. Subsequently, she was to have a sister and an additional three brothers, one of whom died at the tender age of two months. Mary Therese remembered her parents as never being too busy to hear and help. She especially spoke fondly of the many good conversations she had with her father and of the great understanding he showed toward her in her childhood. She also recalled the great kindness shown to her by her brothers, John, Tom and Martin, and her sister, Monica.

Mary Gertrude was in the fifth month of her training to become a registered nurse at St. Vincent de Paul Hospital, Brockville, when she decided to enter religious life. She probably chose the Sisters of Providence because her aunt, Sister Mary Alda was already a member of the congregation. She was eighteen at the time. Sister Mary Flavian wrote to Mother M. Ursula to urge her to receive Mary Gertrude into the novitiate, which she did on August 15, 1931. This date was very appropriate as Mary Gertrude already fostered a devotion to the Blessed Virgin.

On August 15, 1933, Mary Gertrude made her first profession of vows, taking the name of Sister Mary Therese. After profession she studied at Glen Nevis for a short while and then was missioned to Providence Hospital, Moose Jaw, Saskatchewan, where she finished her studies and graduated as a registered nurse. In Moose Jaw, Therese suffered from a severe ear and throat infection which affected her nerves. Nevertheless, she remained on duty full time and was in good spirits. From 1939-42 she was the nursing supervisor at St. Anthony’s Home in Moose Jaw. From there she went to work in the infirmary of St. Joseph’s Vocational school, Winnipeg.

In 1943 Sr. Therese returned to the East where she worked in the emergency department at St. Mary’s Hospital, Montreal and also at St. Mary’s of the Lake, Kingston, Ont. Here she studied at Queens University and obtained her bachelor of Nursing Science degree while at the same time faithfully working the evening shift at the hospital. Sister’s physical and mental health suffered from the stress of over-extending herself, and she was admitted to hospital for some time. Although she was never strong physically, and was tempted to depression and discouragement Therese was always a gentle and beautiful example of faith in difficult times. Those who knew her well remarked that she suffered intensely but that she could always see the funny side of life. She really lived the Paschal Mystery, and because of her ability to love and affirm others in spite of adversity she drew others to herself, and she was loved in return.

During her ministry, Therese was awarded the special honour of a Proficiency Medal in Nursing. Yes, she was a wonderful dedicated nurse. People who appreciated her and turned to thank her would often find that she had already gone along to help someone else. She exemplified the virtues of humility, simplicity, charity and trust in Providence.  Someone was heard to say that she planted seeds of new life wherever she moved.

Sr. Therese was blessed with a thirst for God and in 1982 she was thrilled to take part in a Jesuit Spiritual Renewal Program in Pickering, ON. There, she soaked up lectures on the vows, scripture, liturgy, theology and prayer. Sister also enrolled in the Pastoral Care Program, levels one and two. When she was the Director of Pastoral and Palliative Care at Providence Manor, Kingston, she impressed everyone with her compassion, gentleness and her sense of humour. She would have been embarrassed to have heard herself referred to as a saint and an angel, but those adjectives seemed to keep surfacing in her regard.

In 1987 Therese was shaken by the tragic death of her nephew, Michael who took his own life. Such an action was out of character for this young husband and father, who was cherished and respected by his family, co-workers, and all who knew him. It was only Sister’s deep faith which sustained her and helped her to be supportive of Michael’s loved ones in that time of sorrow. Only two days later, Therese also suffered the loss of her only sister, Monica. Perhaps the pain of these losses was balanced, in some way, by the happy occasion of the entrance of her vibrant young second cousin, Alda Brady in the congregation in 1988.

On December 14, 1995 Sister Mary Therese fell in her room in Marian II and was taken to the Kingston General Hospital for observation. It was determined that when sister fell she struck her head, which resulted in a subdural hematoma. Her fragile health would not permit surgery to be performed. She slipped into a come and died the following morning.

Archbishop Francis J. Spence, accompanied by several priests, presided at the Funeral Liturgy in the Chapel of Mary, Mother of Compassion, Providence Motherhouse, on December 16. As Therese requested, a hymn to Our Lady was included in the celebration. Reverend Monsignor D.P. Clement, a long-time friend, delivered the homily in which he spoke of the profound peace that was in the hospital room when he went to anoint her. After a life of suffering and service she was going home to God, her Great Physician. He remarked that Sister was never heard to utter a critical word about anyone. Many of Sister’s loving nieces and nephews and their families, as well as other friends and Sisters in Religion, attended Sister’s funeral in spite of very icy, winter weather. All joined in the celebration of the life of this special, sensitive Sister of Providence.