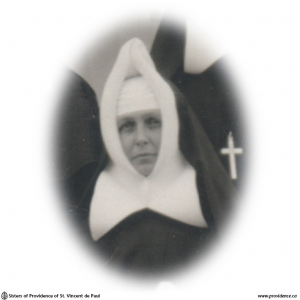 Sister Mary Thomas Aquinas, whose secular name was Anne O’Reilly, died Dec. 22/54. She was born at Madoc, Ontario, into a fine Irish Catholic family of nine. In 1908 following the example of her sister Mary, who was at this time Sister Mary Jerome, she entered the Novitiate of the Sisters of Providence at Kingston, and made profession two years later.

She had already trained as a teacher, and for thirty-nine years she was devoted to the instruction of the young. She taught for periods of from one to three years in each of the following schools:  Kingston, Arnprior, Trenton, Gananoque, Lancaster and Glen Nevis. She was stationed also for a number of years at St. John’s, Perth, St. Michael’s, Belleville and St. Francis de Sales Smiths Falls.

Of a bright buoyant disposition, Sister was the life of community recreation; she could see a funny side of every situation, she was an excellent mimic and could play the mouth organ.

Around 1940 her health began to fail, but she remained on duty until 1949 when she was taken to the hospital and it was discovered she was suffering from a brain tumor. At the Neurological Institute in Montreal she submitted to an operation which disclosed the malignant nature of the disease. After many days passed in a state of coma she rallied sufficiently to be transferred to the Infirmary at the House of Providence.

During the five years she spent helpless on a bed of intense suffering while the cancer spread throughout her body, the sterling qualities of her character were revealed. No one heard her speak of pain; only once, the day before she died, did she ask for any palliative; and in spite of the repulsive nature of her disease every Sister in the Infirmary felt it a happy privilege to wait upon her. Her right arm was terribly swollen – a dead heavy weight which must have taxed her powers of endurance to the utmost; her left hand constantly held either prayer book or beads until her Superior, feeling that she was no longer able to hold the book took it from her and told her to “just say her beads.”

Four months before she died she, along with the other sick Sisters, was transferred to the new Marian Infirmary at Heathfield. Here everything possible in the way of modern hospital equipment had been provided to give relief to the sufferers. One day a Sister visiting Sister Mary Thomas Aquinas asked, “Is your bed comfortable, Sister?” The reply was a broad grin and one word, “Stylish.”

As Christmas drew near, she had either a presentiment or a cherished hope that she would be taken “home” for the feast; for she kept asking, “How many more days?” On December 19th the infirmarian noticed that she was becoming weaker; the chaplain came and recited the prayers for the dying (she had been anointed a short time previously) and gave her the last rites. She was a little better on the 20th and until noon of the 21st. Then she began to sink but remained conscious until 8 p.m.  After that we just waited for the last moment to come. She lived without apparent suffering until 4 p.m. of the 22nd and her funeral was on Christmas Eve. His Grace Archbishop O’Sullivan, although he had to pontificate at the Midnight Mass, celebrated Pontifical Requiem Mass for her. We hope she celebrated Our Lord’s birthday with Him in heaven.

We have lost a truly remarkable woman and, we believe, a saintly religious.