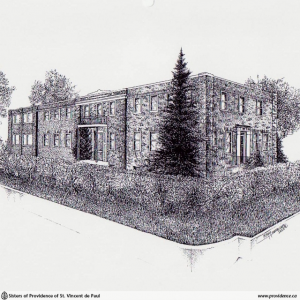 The truths of these words were brought home to our beloved Sister Mary Thomas and to us all on that eventful day Monday March 26, 1923.

At 4 o’clock in the afternoon, the telephone rang, “A message from Belleville”. At first we could not understand, then, a Sister’s voice was heard, “Sister Mary Thomas is dead”. What a shock we received! This is the sixth Sister our Dear Lord has taken to Himself in the last six months. We grieved very much while waiting for particulars. The facts as made known to us were as follows:

In the morning Sister attended Mass, received Holy Communion, took her breakfast and went to school as normal. At noon she complained of a smothering feeling (the Superior wanted her to rest for the afternoon), but after partaking of a little dinner, she said she felt better and returned to the school. During the afternoon she sent for the Sister in the next class room. She told her she had a very severe pain in the region of her heart, and wanted the doctor called. The doctor’s home being near, two Sisters went across and called him. He came at once, and afforded Sister immediate relief, but advised that she dismiss her class and return to the Convent. This was done, Sister walking home in company with a little girl.

When she arrived, she related to the Superior all that had transpired, but said she was feeling better. While a cup of tea was being prepared, she sat to rest in the refectory. All at once she cried out “I am dying” and uttered a few ejaculations “My Jesus Mercy” and breathed her last. The priest was called. Reverend Father Killeen was there in a few moments and anointed her, but life seemed extinct. The poor Sisters felt dreadful, much lamentation was expressed, and her good qualities dwelt upon.

The remains of our dear Sister arrived at the Mother House at 1.30 p.m. the next day Tuesday, and placed in the Community Room, the Superior Sr. M. Angela and Sr. M. Annunciation accompanying them. She did not look at all natural. We could not discern one feature. There was no consolation in viewing the remains.

The funeral was held the next day. There were several early Masses, the last, a solemn Pontifical by His Grace, Most Rev. M.J. Spratt assisted by Rev. Father Killeen, Rev. Father Hyland, Rev. Father Coyle and Rev. Father Leacey. She was placed in the vault with those who had recently preceded her.

A short history of her life –

Sister, whose name in the world was Agnes Esther Murphy was the daughter of Terence Murphy, a well-to-do farmer, and his wife Margaret Carney, living with their large family a few miles distant from the town of Wolfe Island. After graduating from public school, Agnes attended the high school in the town. Obtaining a certificate, she taught but a few months preferring to remain at home and assist her mother in her household duties.

Later, feeling an attraction to the Religious Life, she sought for and obtained her entrance into our Novitiate on March 5, 1891, being then 23 years of age. From her appearance one would judge she was not more than 17 or 18 years. The childlike simplicity she as that time manifested remained with her through life.

She was advanced to the Holy Habit December 17 of the same year and to Religious Profession August 1, 1893. The next five years of her life were spent at the Motherhouse. She was employed in the different offices, always showing great generosity in her endeavour to do her work perfectly.

In August 1898 she was sent to St. Vincent de Paul Hospital, where besides being porter on the convent side, she was given charge of the priest’s dining room.

Recalled to the Motherhouse in July 1901, again she served in the different offices, frequently in the secular kitchen, where it was her delight to prepare the food nicely for the old people.

In September 1903 a trial awaited her which she did not at first realize. She was named for the Primary Class, St. Michael’s, Belleville. Though she had not been in a classroom for many years, never taught in a Primary Class, she gladly accepted the charge and left for Belleville. On the opening day she found herself in an over-crowded classroom of little children, many of whom were appearing in school for the first time. It is only those who have been in a similar position who can understand what she must have endured. She struggled as best she could, flounder at sea for many months. She had one quality which aided her, she possessed kindness, and the mothers becoming aware of this were satisfied, contented that their children were in safe hands.

Finally, she became mistress of the situation and taught successfully. She remained in Belleville four years, then was transferred to Perth, Kingston, Trenton, Arnprior, spending three or four years in each mission, returning to Belleville in 1921, the closing scene of her life. In all, she taught twenty years.