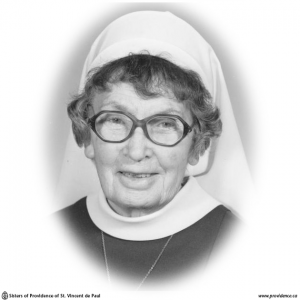 Janet Isabella MacDonell, on of ten children of Mary Ann McDonald and Kenneth A. MacDonell, was born in Glen Nevis, Ontario, on January 17, 1902 and was baptized on January 19.

She lived at North Lancaster, Ontario, receiving her early education at St. Margaret’s School and her high school course at Maryvale Abbey, both at Glen Nevis. She then graduated from Ottawa Normal School and taught in schools in her own locality for four years.

On August 15, 1925, Janet Isabella entered the Sisters of Providence in Kingston. Two years later she pronounced vows, taking the name Sister Mary Thrasilla. Her forty-seven teaching years were marked with dedication and success at St. Carthagh’s, Tweed; St. Margaret’s, Glen Nevis; St. Michael’s, Belleville; St. Mark’s, Prescott; St. Gregory’s, Picton. In several of these places, she was local Superior in the convent. She lost no opportunity to become involved in the local community. She visited the sick, consoled and comforted the bereaved, and was a welcome visitor to the elderly and others confined to their homes. Her concern was to alleviate need whenever or wherever it occurred. After retirement in 1969, she served as local superior of Sacred Heart Convent, Arnprior and St. Joseph’s Convent, Belleville, until 1978 when she came to Heathfield. At the Motherhouse she worked in the dining room until she was no longer able to do this.

Sister M. Thrasilla enjoyed reading, music, crocheting, knitting, and playing cards. She was also a regular choir member. When she could no longer read, she continued to pray fervently, especially the prayer of the rosary.

Sister will be remembered for her faithful, prayerful life, her constant activity and her inimitable gift of good-natured mimicry, wit, and story telling. The laughter that she evoked wherever she lived brought healing for body and soul. At the same time, however, she suffered from scrupulosity during many years of her religious life.

In late 1990, a fractured hip confined her to a wheelchair and her health deteriorated until her death February 26, 1991.

On February 28, 1991, Sister’s funeral Mass was concelebrated by Archbishop Francis Spence with Monsignor D. Clement and Fathers J. Rozon, J. Ferguson, R. Shannon, C. Gazely, L. Byrne, and P. McAvoy. Father J. Rozon, homilist, who had lived close to Sister M. Thrasilla in North Lancaster, recalled the religious fervor of her family as well as her own. Nephews of the deceased were pallbearers and a niece gave the first reading. May other relative were present for the wake and funeral.