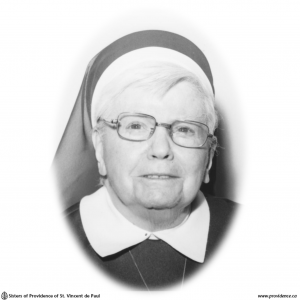 In the early 1900’s John O’Sullivan came with his wife, Ellen (Sullivan) and their ten children from Ireland to Montreal. His mother had been anxious for him to join the rest of the family in Canada. The O’Sullivan’s arrived in summer, but their troop of young ones were all decked out in woolen toques for Ellen had heard about the cold weather ahead of them.

To find work in a foreign land was not easier then than it is now; so, John went often to Bonne Secour Church to ask God’s help. When he was taken on by the Canadian National Railway as a detective, he believed it was an answer to his prayers in that holy place and each year, thereafter, he took his family there on a pilgrimage of thanksgiving.

The faith that moved John to pray in his hour of need was an important part of the O’Sullivan family’s life style. John had three brothers who entered the Congregation of the Holy Redeemer, Timothy and Daniel as priests and Michael as a religious brother. Among his own children two of the girls were to enter the Sisters of Charity of the House of Providence at Kingston. The younger of these two, Geraldine, decided after a short time that God was really calling her to serve Him in a different vocation and subsequently she married. But, the older girl, Hannah, remained in the religious community and she is the subject of this necrology.

Hannah Maria O’Sullivan was born on July 24, 1906, in County Cork, Ireland. She was baptized in the parish of Durrus and Kilcrohame. When the family moved to Montreal they settled in St. Ann’s parish, and she grew up there, taking her elementary schooling at St. Ann’s Academy. The Sister in charge at the time, Sister Mary Gabriel, preferred to call the little girl, “Gabriel”, rather than Hannah. The change of name did not make her angelic, however. She remained a laughing, mischievous youngster, full of fun. Notes were often sent home with her sister, Margaret, describing her behaviour; but, the story goes, these never reached their destination. This led eventually to Mr. O’Sullivan being sent for himself. After hearing about the escapades, he threw up his hands and said, “I’ve got ten children of my own. Why are you bothering me about some Gabriel?”

After grade school Hannah took a year of junior high and some business subjects. When she was seventeen, she came to Kingston, Ontario, to see her cousin, Sister Mary Daniel (O’Sullivan) make her final profession in the Sisters of Providence. It was January 10, 1924. Deeply impressed, she returned home and the very next day wrote asking permission to enter the same community. Within a week, it was accomplished; the Redemptorist pastor of St. Ann’s having highly recommended her in these words:  “…a very good, docile and happy character – three good qualities for a Religious.”  Hannah was the only one to enter on January 17, 1924, and so she was allowed to take her novitiate studies with those who had entered the previous fall.

On August 26, 1925, when she pronounced her vows, she chose to honour her uncle by taking his name and so she became Sister Mary Timothy. As a junior professed Sister, she up-graded her education at Glen Nevis and then attended Normal School in Ottawa. Sister Mary Anita (Collins) who was a Novitiate companion and a fellow student with her in those years remembers how “her understanding, love, kindness and Irish wit meant so much to all around her”. Sister Mary Timothy also had abundant energy and much enjoyed a walk in the fresh air. During their Normal School year, the two friends toured the many interesting sites of our capital city, thus dispelling the loneliness they felt away from their own Community.

Her teacher’s training completed, Sister began a long and fruitful career in education. She taught almost 43 years – mainly in primary grades.  Her first mission was Prescott, where she went in 1929. In following years, the children of Gananoque, Arnprior, Kingston, Belleville, Newmarket and Tweed were to benefit from her dedicated efforts. Sister thoroughly enjoyed her students and made school pleasant for them with music and dramatizations as well as excellent basic lessons. Everywhere she was much loved by her pupils, their parents and the Sisters she lived with. Her lively spirits brought added joy to afternoons of skating or tobogganing and to school parties; but most of all she delighted in a sing-song when she could join in all the Irish tunes she knew so well. As a child she had learned many a song by performing with her talented family as they put on an entire Irish program themselves.

Along with the many other teaching Sisters of the period from 1930 to 1965, Sister frequently attended summer school, improving her skills in primary education, physical education, school music, use of visual aids, etc.

Her relatives in religion – Father Day, Father Tim, Brother Michael and Sister Mary Daniel – were a great support to Sister in her vocation. She needed this support most particularly when her brother, Michael, was killed in World War II, when her mother died, and when her grief-stricken father lost his eye-sight and had to take up residence at the Father Dowd Home in Montreal.

Sister Mary Anita was suffering family losses at this time, too, and the two chums often took “Dada” (Sister Mary Timothy’s father) and Sister Mary Anita’s widowed mother for an outing, perhaps a picnic, a boat trip or a visit to relatives. The visits to relatives “brought great happiness to all concerned”. Visits to gravesites were accompanied by decades and decades of the rosary, until everyone had been remembered in prayer. Like many an Irish Catholic, Sister Mary Timothy was seldom without her “beads”.

Sister Mary Timothy was principal at St. John’s School, Gananoque, when she retired from teaching in June of 1970 and was assigned to Providence Manor to assist in the apostolate to the elderly. One of her duties was to accompany the residents going to the hospital or to clinics for treatment. She was active, also, in the Legion of Mary.

It was during this period at Providence Manor that Sister began to show early signs of Alzheimer’s disease. By the fall of 1981 it became necessary for her to transfer to the Infirmary at Heathfield.

As her illness progressed, Sister became less and less in touch with reality, but amid the ravages of disease there survived a wonderfully conscientious person. She kept her smile and the bright twinkle in her eye. It was particularly hard for her in those last years that, for fear she would wander off, she could not be allowed to go outside alone for one of her much loved walks. Relief from this destructive disease came for her on August 28, 1987. On that day, Sister Mary Timothy died of pneumonia.

The funeral Mass was held on August 29 at Providence Motherhouse. The main celebrant was Archbishop F. J. Spence. Concelebrating were Monsignor J.G. Hanley, Fathers J. Rozon, T. Raby, W. Steacy, CSsR and L. Byrne. In his homily the Archbishop commended Sister Mary Timothy for her close following of Christ in her family’s faith, her working years and in her years of illness. The recessional hymn of the service was that familiar tribute to St. Patrick which begins, “Hibernia’s Patron Saint, all hail!” We pray that Sister Mary Timothy may experience the “endless glory given” to those many saints who came from the Emerald Isle to share their faith and good works with us.