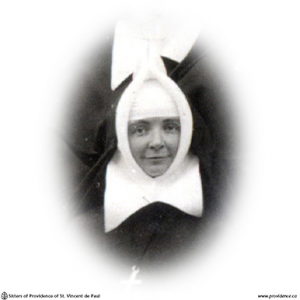 On the 10th day of May 1916, there came to the Providence for entrance into our Novitiate a bright little lady. Acting under the advice of Rev. J.L. Cotter, S.J. she had obtained permission for this initial step in the Religious life some months before.

Elizabeth Coleman as she was known was the daughter of James and Elizabeth Coleman, prominent Irish Catholics, living in the parish of St. Patrick’s, Montreal. Their family consisted of but two girls, of which Elizabeth was the elder. She was educated by the Sisters of Notre Dame, having attended as a day pupil in their convent school nearest her home. After graduation, not finding sufficient to distract or occupy her mind in her home, she applied for a position in the Bank of Commerce. Succeeding in obtaining her desire, she entered on her new duties with the greatest alacrity.

So capable and efficient did she become, that she was advanced from year to year and entrusted with many important matters. Such regret was expressed by the management, when at the end of seven years, she gave notice of her withdrawal from the company. Inducements in the way of an advance in salary and bonuses were held out to her, but to no purpose, she had taken her resolution and must accomplish it.

She came to us, as we have said, in our Blessed Lady’s month, so bright, so cheerful, so ready for everything. She was not very robust looking, was on the contrary very thin and pale, but apparently wiry, and as she said, always healthy.

She was employed for the first eleven months as portress and companion to the General Office, but when sent to other employments she went gladly. During the second year of her Novitiate term, her free time was given to study. With others she began reviewing high school work. After her Profession Aug. 27, 1918, she was sent to Maryvale Abbey, Glen Nevis, to continue her studies.

Here a big trial awaited her. She began with her companion’s hopeful enough. To pass the examination for middle school was the goal set before them.

But for Sister, the work was hard. The books were all so different to what she had been accustomed. She had been out of school for seven years, and her mind had been engaged in things altogether foreign.

She plodded on but oftentimes weary and discouraged, she would be on the point of giving up. The trial was great, she who had been accustomed to take the lead in work and study, now sees herself eclipsed by others. However, she was encouraged by her good little Superior, Sister Mary Stanislaus, to persevere.

It was three months before she recovered herself. But after that she went on with master strides. Very soon she began to attract the notice of her teachers. They observed with much pleasure and gratitude her progress and the ease with which she now advanced. How pleased they were, as were we all, when the results of the final examinations were published in the Toronto papers – (Honours) after Sister Coleman’s name. On that day she got a telegram from her father (she was his special favourite). He too, had been watching for the results. His words of exultation were few, but they meant much.

The following September, she, with her companions, six in number, went to Normal School, Ottawa. All were successful, receiving their certificates, July 14, 1920, qualifying them to teach in the schools of Ontario. A few days later Sister was permitted to visit her parents. She was then at the request of Rev. Msgr. D.R. McDonald, appointed to teach in Glen Nevis. She was happy to go, to make a return for Reverend Monsignor’s kind interest. No doubt Sister thought, as we all did, that many years of love and service were before her, but, again, how little we know of the future.

In ten short months she returned, at the close of the scholastic year in July 1921 – was coughing, had been under a doctor’s care, had to go to bed at once, be given a separate room, the doctor feared tuberculosis.

In August her father came and wanted to take her to the Adirondacks. He was advised not to make this proposition, as the time for Sister’s Final Profession was near at hand, that after Sister was stronger she would be sent out to Edmonton, where it was hoped, the climate of Alberta would restore her to perfect health.

Sister was not able to make the annual retreat but on the day of Profession, August 31, 1921 with assistance she came to the railing and pronounced her Final Vows. She could scarcely be heard, her voice was so weak. The greater part of the fall and winter she was confined to bed. Towards spring she recovered somewhat, was able to be up and about. In June of that year 1922, she again went to visit her family in Montreal. Mother Vincent accompanied her, they remained two weeks. In October of that of that year she was sufficiently strong to journey to Edmonton in company with Sister Mary Adalbert. She took up residence at Rosary Hall, and for some time it was thought the change would prove beneficial, that her health would be restored.

Some time later a vacancy occurring in one of the schools, she was asked to substitute for a time. She was glad to get into work, but it proved too much for her strength. She had to give up after a few months. She remained at Rosary Hall for a year giving assistance in the offices as she felt able.

In the autumn of 1923, she turned her steps homeward, coming as far as Moose Jaw. Arriving at Providence Hospital in a very weak condition, she was put to bed from which she was never to rise. Every attention her condition required was lavished on her here. She appreciated this so much. She could rest, was happy and at peace. She had no desire to go farther. She found here that quiet she had long desired. Much praise is here due to the Superior, Sister M. Eulalia and the Sisters, for their great kindness and charity to our dear little forlorn Sister Mary Urban. Her parents and sister came to see her, and were pleased to find her so happy. She was frequently visited by the clergy who found pleasure in conversing with her. She continued so bright and cheerful. She lived on into spring, but little by little faded away. She departed this life on April 24, 1924.

Sister was laid out in the Community, and the ceremonies carried out as in the Mother House. The funeral Mass as well as the Libera were offered in the convent chapel by the pastor Rev. Father Conroy, after which all that was mortal of our beloved Sister was placed in St. Joseph’s Cemetery, Rev. Father and his assistant acting as pall-bearers.

When the writer had the privilege of visiting the place in 1928, one little stone marked the spot where she reposes. It looked sad to see the one lonely stone, in that far off land; however, it will not matter on the great day of the resurrection, her spirit will unite with that body in the twinkle of an eye.

It was remarkable too, the Rev. Father Conroy who had great regard for Sister, and who was apparently very well on the day of the funeral, also lay a short distance from her, the place being designated by a large tablet lying flat on the ground, as the greater number of graves are so marked there.