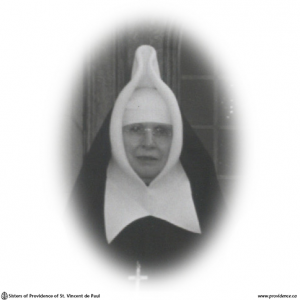 Only ten days after the funeral of Sister Mary Alfred on May 31, 1966, another Sister was called unexpectedly to her eternal reward.

Sister Mary Urban (Ethel Mulholand) was born in Kingston, the daughter of James Mulholand and Annie Dunphy, and lived all her life in her native city. After her elementary schooling she received a commercial education, but exceptional skill in needlework induced her to establish and carry on for some years in her own home a dressmaking business.

On September 6, 1924, she entered the Novitiate of the Sisters of Providence. After Profession she spent a few years in the care of the children at St. Mary’s of the Lake orphanage, and then was called to the Mother House to take charge of the “white sewing” that is, the making of the Sisters’ linens.

This work, much more extensive than it is now when so much of the costume can be ordered ready-made from firms, enabled Sister Mary Urban to live a life almost wholly contemplative. And she made the most of her opportunity. In her early religious life, while always of a retiring disposition, she was fond of recreation and proved a pleasant companion during the time allotted in the community to social intercourse. But later, as her health began to fail she had to spend the time of community recreation in rest, so that her days were divided between her work and prayer.

To both of these activities she was faithful to the end. The day before her death she was, as usual, at her sewing machine. The following morning, the feast of Corpus Christi, it was only at the time of Holy Communion that a Sister companion missed her from her place in chapel. Immediately after Mass, Sister went to Sister Mary Urban’s room, and found her lying on her bed, partially dressed, dead. She had evidently suffered a heart attack while dressing, and had lain down. As she was preparing to go to meet her Spouse at the Eucharistic banquet, He came to meet her and conduct her to the eternal nuptial feast.

Of Sister Mary Urban the same question might have been asked as was asked about St. Therese of Lisieux. “What will they have to write about her after her death?” Her perfection in her work, her fidelity to her covenant with God, her loyalty to her community, her spirit of prayer and recollection, and especially her charity might not be known beyond the circle of her immediate companions; but we cannot doubt but that there could be applied to her the words of Reverend Paul Hinnebusch in his book Salvation History and Religious Life: “She who is espoused to the Word in the silent virginity of the heart will be a fruitful mother in bringing many souls to Christ.”

In the absence of the Archbishop who was ill in hospital, the funeral Mass was offered by the chaplain, Reverend Father Flurey, assisted by Father Ed. Keyes and Father William Burns of the Cathedral staff. May her soul rest in peace!