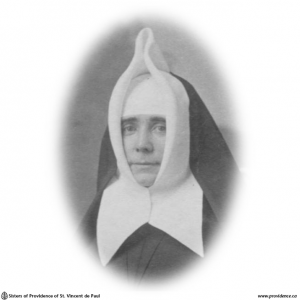 Mother Mary Ursula, the former Miss Rose Mary Byrne of Stanleyville, Ont., died on Sunday morning, May 25th, at the Hotel Dieu. Her death was most unexpected. She was taken to the hospital a week before suffering from a fractured leg, and it was hoped she would be allowed to return in a few days. God’s ways are not ours and He accepted from her the supreme sacrifice in her own oft-repeated words: “God’s holy will be done.”

Before she left for the hospital, it was her wish to be anointed and she then made her preparation for death with great devotion. Our reverend chaplain administered extreme unction, and after this ceremony, at which the Sisters, including Novices and Postulants, assisted, she experienced much happiness.

Since coming her to Heathfield in September, despite her failing health, Mother Ursula’s regular attendance at daily Mass, Holy Communion and visits to the Blessed Sacrament, was a source of edification to us Sisters. With her usual devotion and faithfulness, as well as her charity, forbearance and self-effacement, we can feel assured of the glorious reward awaiting her.

All her early years were spent in teaching until 1924, when the Community elected her Superior General for three years. Following Mother Clement’s death in 1930, she was again placed at the head of the Community which she governed during the following six years, with much success. It was during her administration that the new Mother House and Novitiate here at Heathfield which she loved so well, were erected. She was happy to return here to spend her last days with us, but her time was short, much shorter than she or any of us could expect. She made good use of this time. May the remembrance of her virtues help us to seek her intercession before the throne of God, R.I.P.

Sister M. Evangelist, four other sisters and one brother survive. She had spent fifty-five years in religion.