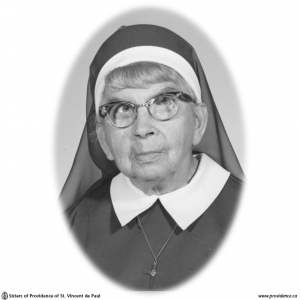 Valeria Barbara Yenta was born on December 4, 1895, in Renfrew. She was one of nine children born to Thomas Yenta and Antonina Zyeviski, who had migrated to Canada from Poland in 1893 with their three month old daughter.

As a young girl, Valeria had a great desire to become a religious and, on approaching Bishop Ryan, he took a negative view thinking she was too young. On a second try, an appointment with the Bishop’s brother, Fr. John Ryan, in the parish of St. Francis Xavier, could not be kept because of a bout with flu and, before she recovered sufficiently to keep it, he was transferred to another parish. Meantime, her mother’s instinct caused her to question Valeria about plans for her life. Valeria insisted that she was going to become a religious and Mrs. Yenta asked her how she would proceed. Nothing daunted, Valeria went that very afternoon to consult Father Jones, who lost no time in making arrangements for admission to the Novitiate. Keeping all these things to herself until her sisters were planning a trip abroad after Christmas, she decided to tell the family of her plans. Can anyone or anything thwart the plans of God! She entered the House of Providence on February 1, 1919, and made Profession on January 8, 1921, taking her own name.

Sister’s one great desire was to be a nurse but she was destined to use her talents in other area such as housekeeping, kitchen, dining room, sewing, etc. During her lifetime, Sister Valeria used these talents at the House of Providence, Kingston; Providence Motherhouse; St. Mary’s Home, Edmonton; the Villa (Brown House), Kingston; and St. Michael’s, Belleville. She was Superior at Chesterville, Picton and Arnprior and retired to Heathfield in 1970 and was the pray-er for Sister Anna Moran in Brantford.

Sister M. Valeria greatly treasured her family and was keenly interested in their lives. She was a very special person to her brothers and sisters and her many nieces and nephews.

She was known for her kindness, perseverance, generosity, strong faith, charitableness, patience, pleasantness and prayerfulness. She touched the lives of many and gave generously of her time and talents.

At Sister’s wake, Sister Bernice fondly remembered her with the following tribute:

Silent, peaceful personality
Interested in all God’s people
Sustained by her deep prayer life
Thoughtful of all with whom she lived
Eager to please God – the centre of her life
Religious Sister, first, last and always
Mary was her model, Motherly she was
Admirable woman
Respected by all who knew her
Youthful in her love of life

Valiant woman of the Gospel
Adjusted well to all circumstances
Loved by all who knew her
Excellence was her aim in life
Realized her end was near and found peace
Interior soul in love with God
Artistic beauty gave her joy.

Sister M. Valeria died on January 15, 1992, in the 73rd year of her religious life. Archbishop Francis J. Spence, assisted by many priests, presided at the funeral Mass in the Chapel of the Immaculate Conception, Heathfield, and Father J. Rozon delivered the homily.