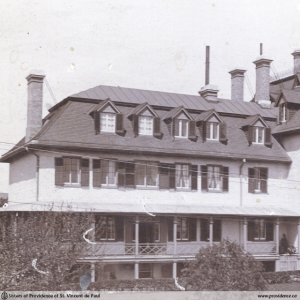 Mary Austin was born in Worcester, Mass. July 3, 1852 of respectable, Irish Catholic parents. At fourteen years of age she lost her mother, a loss of which she could scarcely speak without great emotion. Being the eldest of the family the care of a sister and three brothers fell to her lot, and with wisdom beyond her years she acquitted herself of the various duties which her new charge placed in her way. Her prudence at this period won for her the highest esteem of those under whose notice she came particularly her worthy pastor, P.T. O’Reilly, who subsequently became Bishop of Springfield and who, when he heard of Miss Austin’s intention of becoming a member of our Institute, spoke of her to the Superior as one most worthy of commendation; making special reference to her mode of action while she was mistress of her father’s household. After a few years Mr. Austin remarried, and relieved Mary of weighty responsibilities.

In May 1874, she (the first candidate from the Diocese of Springfield) entered the Novitiate and no novice ever gave herself with greater ardour to the different works of the Institute. Shortly after she received the Holy Habit she was sent to the mission of Holyoke, Mass. where she remained ten months, after which she returned to resume her Novitiate prior to her religious profession, which to her great satisfaction she was permitted to make on August 7, 1876, receiving the name, Sister Mary Veronica,

She was of delicate constitution, and very soon it was observed that her sojournment here below would not be of long duration. However, shortly after profession she was again sent to Holyoke; but her health became so enfeebled that it was found necessary to bring her home after a few months. She continued her novitiate and was scrupulously exact in attending the various exercises from which though an inmate of the infirmary, she never absented herself without a special dispensation, and this was rarely sought. She was most exact with regard to the employment of her time, never permitting herself the gratification of remaining idle, a privilege which those who suffer from a prolonged illness generally regard as their just due.

She earnestly desired to die a professed novice, but Providence willed otherwise, she being one of three sisters whose term of novitiate had expired was brought to the Community, February 1, 1880. The next day, Feast of the Purification she came to the Community room, but was unable to remain longer than one hour. It was the first and last hour she passed there as a sister of community.

Her strength gradually wasted. Frequent vomiting of blood, and a distressing cough, at length did their work, and about three o’clock on the morning of March 11, 1880, she calmly and peacefully breathed her pure soul into the hands of the Creator, in the twenty-eight year of her age and the fourth of her religious life. After the last sad and solemn rites were ended, the body of this well-beloved sister was reverently placed in the vault, over which towers St. Mary’s Cathedral, there to rest in peace with her religious co-labourers who had already gone to their reward.