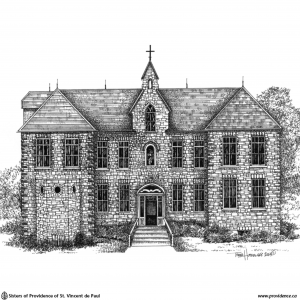 Early in August 1918, when Sister Mary Veronica returned from her mission, Arnprior, where she had been teaching the previous year, she made known to the Superior General her anxiety, because a small growth on her breast, which making its appearance a couple of months previous, was beginning to send out darts of pain.

Upon examination, the Superior, Rev. Mother Clement was alarmed, and expressing regret that Sister had not made known her ailment earlier, she sent her at once to Dr. Cornell, Brockville. At the end of a couple of weeks when the sisters were home for retreat, the doctor told Sister she might also go, as he did not purpose doing anything for her before September. He informed the Superior of the hospital however at the same time, that he did not purpose operating, there was no arresting the disease, which very soon proved true.

A week after the retreat Sister feeling poorly remained in bed. The 1st of October feeling better she got up, and through the coming day came down to the office, but taking a violent pain in the head she had to return. From that time the pain in the head never ceased. On November 14th, she received the Last Sacraments at the hands of saintly Rev. Father Joseph, not that there was any immediate danger of death, but that she might have strength to endure her great suffering. All the complaint was of the head, the afflicted part apparently not troubling her. On Jan. 16, 1919, she was anointed for the second time. She lay in her bed all that long year in agony, but she yet preferred it rather than to dull the sense of feeling by resorting to drugs. She was visited frequently by His Grace, Most Rev. M.J. Spratt, who by his prayers and kind words of encouragement afforded her much consolation. She was also visited by many of the clergy.  Reduced almost to a skeleton, it became apparent at the close of the year that the end was not far distant. She retained her mental faculties but was almost blind and deaf for months.

A retreat opened on the first day of the year 1920, conducted by Rev. Father Cormier, S.J. Sister was again prepared for death. Two days later on Saturday Jan. 3rd the Sisters were assembled, the Rev. Father also came, and remained to the end which occurred at half past three o’clock. Many of our dear Sisters died on Saturday. We cannot but have confidence Our Blessed Mother will hasten to bring our dear Sister M. Veronica into her Heavenly Home.

Emma Tierney, as Sister was known in the world, was the daughter of Michael Tierney, farmer, living not far from Ottawa. Born Dec. 10, 1871, she was educated in the public schools of the place, and later in the Ottawa Collegiate. Obtaining a certificate she thought of devoting herself to teaching, but later changed her mind, and lived for a few years with her sister Mrs. Cunningham of Ottawa.

Having an inclination to the Religious life, and learning of our Community through her sister who had entered six months before, she applied for her entrance and was admitted into the Novitiate, Jan. 6, 1902.

Like her companions she was employed during her term of probation in all the offices of the House, and being gifted with a kind and amiable disposition, she gave satisfaction everywhere. She was in due time clothed with the Religious Habit and advanced to Holy Profession.

Some time after her profession, there being an urgent call for more Teachers, she was sent to resume her studies. This was no easy undertaking, as he had been out of school for a long time, during which term the educational system and books had undergone much change. However, she obeyed the order, and notwithstanding many difficulties persevered faithfully, and in the end was crowned with success.

She taught successfully in Trenton, Belleville, and lastly in Arnprior, in which mission her name is held in high esteem.