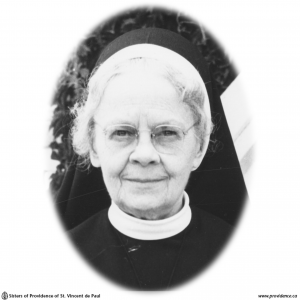 Sister Mary Veronica (Mary Marguerite Williams) was born in Quebec City on September 6, 1898, a daughter of J. Benson Williams and Elizabeth Anne Quinn. When Marguerite was just two years old, her only sister, Mary Angela, died and three years later God called her father. Her Mother lived until the early twenties and two brothers, Benson and Mott, died in the 1940’s, the latter in active service in Hong Kong during War II.

Marguerite had commenced training as a nurse at St. Vincent de Paul Hospital, Brockville, but at the end of her first year in 1928 she entered the novitiate of the Sisters of Providence. After profession as Sister Mary Veronica, she resumed her training, obtained her R.N. diploma and began a long and fruitful life in the health apostolate.

In 1935 she was assigned to Providence Hospital, Moose Jaw, as Superintendent of Nurses. The year 1938-1939 she spent at Toronto University, studying nursing services education and on her return to Moose Jaw became Directress of the training school, a post she held until ill health obliged her to withdraw in 1964.

The nurses’ year book of 1965 contained a tribute to Sister from which excerpts have been culled:

“The depth and the breadth of the contribution made by Sister Mary Veronica to the School of Nursing of Providence Hospital, and more especially to the individual students is immeasurable. From the time of her arrival in Moose Jaw in 1935 until leaving in 1964 she quietly, but firmly and gently, molded all facets of nursing education into a unified whole. As times changed, Sister Mary Veronica progressed, judicially selecting that of the new which was useful and carefully retaining what of the old that was valuable. Each of the 424 Providence Hospital graduates or current students who had the privilege of being her friends give heartfelt thanks that she was selected to assist in the guidance of our School for so many years.”

In 1964 Sister was admitted to St. Vincent de Paul Hospital, Brockville, suffering from a rare blood ailment, and was sent for some months for treatment at St. Mary’s Hospital, Montreal.

After four years in the East, Sister had recovered sufficient health to return to Moose Jaw, now with the lighter duties of sacristan. But in January, 1972 the illness recurred and she was obliged to retire to the Motherhouse Infirmary.

In the eight years of retirement, in spite of her weakened condition she strove to be present with the Community each day for meals and to join in some of the activities of the house, although a serious impairment of hearing prevented much communication with her sisters, and must have made her later life a lonely one. However, she was an avid reader and made good use of the library.

Sister was especially noted during these years for the practices – many little acts of kindness and devotion to Holy Mass. On the afternoon before her death she had, as was her custom, prepared toast for some Sisters more infirm that herself; and at the moment of her death was preparing to attend the first Mass of the day.

At the present time at Heathfield we have three masses each morning, at 7:00, 9:15 and 10:30 and Sister M. Veronica frequently assisted at all three. So on January 11th no one remarked her absence from the 7:00 Mass, or from breakfast; it was thought she was tired and would be up for the later Masses. When Sister Margaret Black went to her room with her mail about 9 a.m. she found Sister lying on the bed, partially dressed. At first Sister Margaret thought she was resting, as she usually did after breakfast, but a second glance showed she was not breathing. The doctor came at once, and although her body was still warm, she was beyond resuscitation.

The funeral Mass was concelebrated by His Grace, Archbishop Wilhelm, and Father Dan Ryan. His Grace in a simple sincere homily spoke of Sister’s appreciation of and love for the Mass. The pallbearers were Sister M. Dolores, Catherine Rose Myers, Margaret Killeen and Elizabeth Cassidy.

Sisters only close relatives, a niece, Virginia Williams of Quebec, and a grand-niece, Eleanor Pethick, with her family, of Willowdale, Ontario, attended the funeral. Also present was Beverly Orser, a medical student at Queen’s, who visited Sister regularly; her mother had been one of Sister’s student nurses in Moose Jaw.

The Sisters of Providence Hospital sent us copies of letters received from graduates on learning of Sister’s death. Over and over occur such comments: Sister Mary Veronica was a loving, caring person; she had concern for each and every one of her students.

Sister Mary Cornelia, who had worked with Sister during her thirty years at Providence Hospital, summed up the memories the Sisters have of Sister Mary Veronica “quiet, very kind, and thoughtful, with a good sense of humor; first and foremost an example of an excellent religious.”