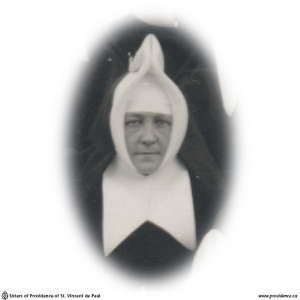 Sister Mary Victor died Friday morning, December 28th, Feast of the Holy Innocents, in the Marian Infirmary where she had been a patient over the past eight years.

A native of Mayo, Que., the former Margaret Dunnigan, as she was known, entered the Novitiate, then at St. Mary’s of the Lake, in 1910. After she made profession in 1913, Sister M. Victor was sent to Maryvale Abbey, Glen Nevis, and afterwards taught in the schools of Perth, Brockville, Prescott, Belleville, and Gananoque. Her last assignment was St. Mark’s Convent, Prescott, until she was obliged to resign due to ill-health in 1947.

A victim of arthritis for over thirteen years, Sister was transferred from the House of Providence, here to the Mother House, when the Marian Infirmary was opened in 1954. Bed-ridden and inactive though she was Community affairs were always of interest, as well as keeping in touch with her own people, through correspondence and visits from them to the last. In fact she was in the midst of her Christmas mail, and had enjoyed looking through her letters, cards and gifts up to the 27th previous to her death. That day she was not so well although her condition was not alarming. During the night she became worse, and in the early morning of Friday with Sisters around her in prayer, our dear Sister M. Victor was suddenly summoned by death, and peacefully gave back her soul into the hand of her Creator. Purified in the school of suffering, and with much to offer, we trust she is now enjoying her reward and rejoicing “that she was counted worthy to suffer …” for the Master she had tried to serve so well.

In June last, Sister M. Victor had the privilege of observing her golden jubilee, a privilege which brought her much joy and spiritual consolation after her long years of confinement and suffering.