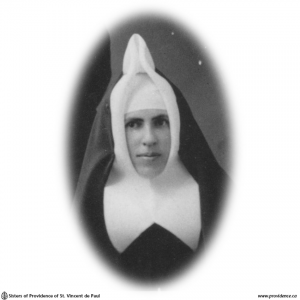 Mother Mary Victoria, Superior General, died suddenly on Monday morning, February 6, 1950, at Providence Mother House, Heathfield, after a few days’ illness. The doctor pronounced death due to “coronary thrombosis”. Our dear Mother General was anointed but she was not conscious of it and apparently beyond earthly consolations while we trust she received the benefit of spiritual comforts in her dying moments.

Mother Victoria before her admission to the Community taught school and since her admission this work was her principal occupation, and one in which she distinguished herself as a teacher of great repute. Her first appointment after profession was to Sacred Heart Convent, Arnprior, where she taught for 21 years until her election to the General Council at the Mother House, Kingston, in 1930. While on the Council she taught in St. John’s School until her election as Superior General in 1936. She was re-elected in 1939, and in 1942 she was appointed local Superior of St. Mark’s Convent, Prescott. At the General Elections in 1948 Mother Victoria was again returned to office as Superior General of the Community a position which she held until her untimely death.

As teacher, Mother M. Victoria was revered by her pupils, and esteemed by citizens of all creeds; as Mother General, she inspired confidence and respect in her social contacts and was held in the highest regard by members of her Community.

Mother Victoria possessed a great soul. Her ambition was perfection in the love and service of God. She thought things through, was convinced of the right action and then clung to her decision. The Community was safe under her wise direction. We owe her much for her prudent guidance and good example.