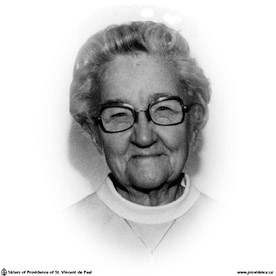 Caroline Josephine Kramps was born on March 28, 1907 at home, the second of 13 children born to Caroline and August Kramps. Her parents were immigrants from Europe. Her father, born in Germany went to the United States in 1889 at the age of 17 and later came to Canada. Her mother came to Canada from Austria at 4 years of age.

Caroline grew up on the family farm at Daysland, Alberta with loving, faith-filled parents. As a child, Caroline felt a desire to be a Sister. She lived through the dreadful 1918 flu when her entire family fell ill with it and people all around them were dying. Her mother told her some time later that she had made a promise to God that if Caroline lived she would not prevent her from entering the convent. Caroline decided to stay at home to help her mother until the last baby was born. When her brother, Leonard, the last one born, was 2 years old, Caroline decided to meet the Sisters of Providence at Daysland. So when her father was delivering a load of hay to the Sisters to feed their cows, she went along with him. She met Sister Mary Alfred and told her that she wanted to enter a Community that took care of the poor. Sister Mary Alfred responded. “That is us.” Caroline was beginning to see her dream come true.

She left for Kingston with Dolores King, a postulant, and Sister Mary Martina arriving at the House of Providence in Kingston on September 26, 1928. She felt extremely lonesome for her family during her novitiate. It was 7 years before she saw them again. But to her great surprise she had a brother and a sister born after she entered.

Her first appointment after Profession in 1932 was to St. Mary’s of the Lake, an orphanage at the time, to help with cooking and caring for the children. That same year she went to the House of Providence to work in the sewing room and then in the infirmary. Then in 1934 she went to St. Mary’s Home, an orphanage in Edmonton, where she was house mother for the next 14 years. She returned to the house of Providence in Kingston for a year and then again to St. Mary’s Home in Edmonton for another year. In 1950 she went to St. Joseph’s Hospital in Edmonton and on to St. Joseph’s vocational School in Winnipeg where she delighted in working with the children for the next 9 years. In 1959 she was appointed Superior of Rosary Hall in Edmonton. After 6 years at rosary Hall she returned to St. Joseph’s vocational School to look after the chapel and to help with the cooking. In 1980 Sister Mary Vincent was appointed to the new St. Joseph’s day Nursery in Winnipeg to cook for the children and later just for the Sisters.

In 1992 Sister came to the Motherhouse where she visited the sisters in the infirmary. She continued this ministry until her own health would no longer allow her to do this.

On Monday, February 19, 2007 Sister Mary Vincent was called home to her loving God. May she rest in peace.