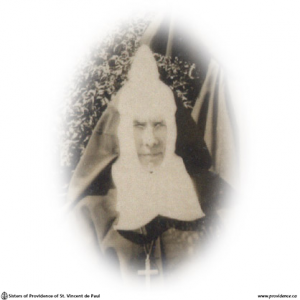 Little did the Sisters dream as the joyous notes of the Alleluia rang out on Easter morn, April 17, 1927 that, these were to be soon to be followed by the doleful knell of the “De Profundis”.

Mother Vincent attended all the religious services of Holy Week, and with her Sisters looked forward to celebrating with becoming gladness the joyous Feast of the Resurrection. Retiring in her usual health on Saturday evening she was stricken during the night with severe pain, which prevented her from responding, as was her want, to the early call of the convent bell. The pain continuing, the doctor was called in the course of the morning. He was not long in discovering the cause of the trouble. Mother had pneumonia, and as her heart was in poor condition, she would require constant care and attention. This was given, and as a result the disease was arrested or kept in check, but fear was entertained for the struggle, owing to the weak condition of her heart. It was thought wise to have her prepared for the dissolution, should this occur, a proposition to which she readily acceded. She received the Last Sacraments of the Church on Thursday at the hands of Rev. Father Hyland, being perfectly resigned to God’s disposition in her regard. Hopes of her recovery were yet entertained until Saturday morning when signs of approaching death were manifest.

She passed peacefully away at 4.30 p.m. surrounded by her Sisters and joining in the prayers that were being offered for her by Reverend Father McCormick of the Redemptorist Order of Brockville, who was in attendance at her death. How strange, it was only on Monday when she returned from Brockville whether she had gone four weeks before for a change, that she remarked when told she was looking well, “yes, I am a new woman”, so much benefit she thought she derived from the rest.

Mother Mary Vincent (Jane (McDonnell) was a native of Ireland being descended from the McDennells and O’Donnells of the County of Sligo. In company with her sister she left her native land at the age of [left blank] years, spending some years with friends in Springfield, Mass. On May 3rd, 1885 she entered our Novitiate, in this step following her sister who was now a Professed Member of the order. Apparently never robust, she was always able for duty and to follow the religious exercises.

Some time after her Profession, she was appointed visitor of the poor and sick in Kingston manifesting in this capacity a zeal and prudence far beyond her years. In July 1896 she was sent to St. Vincent de Paul Hospital, Brockville, where she was Supervisor for several years. When St. Francis’ Hospital, Smiths Falls was opened in 1904, she was named its first Superior. She made many warm friends for the hospital by her kindness and self-sacrifice.

At this time she was visited with a great sorrow in the loss of her dear sister, Mother M. Scholastica, then Superior General, which affected her greatly. Her health failing in 1909, she was transferred to a smaller mission, appointed Superior of St. Michael’s Convent, Belleville. Here in the quiet of the convent chapel she poured forth her soul in prayer, spending long hours in communing with her God. In July 1913 she was recalled to the Mother House being elected Assistant of the Superior General, which office she held to her death. She was the last surviving member of her family. Her only brother, Rev. Canon J.J. O’Donnell, pre-deceased her three years before.

The funeral was held on Tuesday morning April 26, 1927. In the absence of His Grace, Most Rev. Archbishop Spratt, a solemn requiem Mass was offered for the repose of her soul by Rev. Father Hyland, Rector of St. Mary’s Cathedral, assisted by Rev. A.J. Hanley of Gananoque, Rev. J. McCabe and Rev. J.J. Clancy. Present in the sanctuary were Rev. T.P. O’Connor of Napanee, Rev. J.T. Hanley of Tweed and Rev. M. O’Hanlon Erinsville and Rev. A. Fowler of St. Mary’s of the Lake.

After the saying of the Libera the remains were transferred to the convent plot in St. Mary’s Cemetery.