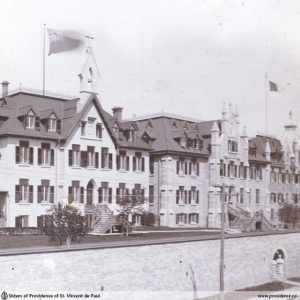 In Mary’s month, 1886, the Angel of Death summoned to a well merited reward our much loved Sister Mary Vincent, in the forty-third year of her age and nineteenth of her religious life.

Her family name was Julia Stafford, born at Lanark Ont., of highly respectable parents who cultivated their own farm and brought up their children in the pure principles of our holy religion. Three members of this favoured family consecrated their lives to the divine service: Rev. Father Michael Stafford, who was parish priest of Lindsay at his death in 1882, and Sisters Vincent and Elizabeth, both exemplary members of this Institute.

The entrance of this pious young candidate in Jan. 1868 was a subject of universal joy and gratitude in the Community which at this period of its existence sorely needed generous and intelligent labourers.

For several years Sister Mary Vincent laboured zealously in the servi of the poor. As a young sister she was employed in the care of the orphans; she discharged every duty towards Christ’s little ones with a special tenderness and her relations towards them marked with a genial warmth. It was an almoner of the poor that she was best known, and among the ignorant and the wayward she toiled unceasingly and effected much good.

To the destitute and suffering she was a ministering Angel. In prison, the jail, the cellar, the garret, wherever there was sorrow to be assuaged or misery to be relieved, hers was a familiar form, and of her it is told, that when unable to do all her great heart desired, she would weep over the miseries she was powerless to relieve.

She excelled at imparting religious instruction and it was her greatest happiness to prepare children for First Communion, or bring to the sacraments grown up persons whose early education had been neglected or who had wandered from their religious duties. The evening class for instruction of adults, customary from the establishment of the Community, was conducted with singular zeal during her long term in the office of “visiting Sister.” In the early springtime each year a number of these poor fellows would be prepared for Confirmation and presented to His Lordship. So rejoiced was our honoured prelate over the great effected in this way that he highly commented on the zealous labours of our humble sister. To protect them against the voice of intemperance to which sailors are inevitably exposed, she would persuade them to take the “pledge” before setting off on their perilous undertaking, and intense was her joy when assured of their perseverance in this sacred promise. In a work so noble and soul-saving, our sister strongly resembled her Rev. Brother who was deservedly styled the “Apostle of Temperance in Canada.”

Summing up all the evidences of a life wholly devoted to serving, rescuing, elevating and consoling the destitute and fallen children of God, it must be confessed that she certainly imitated her great patron, Saint Vincent de Paul. She was naturally inclined to piety, had a strong spirit of faith which animated all her actions and by her fevor and earnestness of purpose, this great soul drew many into the true church.

Her valuable services as pharmacist at the Mother House has merited at the grateful remembrance of her Community. Possessing much medical skill, both natural and acquired she used it with that kindness of manner which was more appreciated by the patients than the most soothing prescriptions.

For some time previous to her death, she yielded to the disease that finally terminated early a life of usefulness. She would gladly have lived to do more good, but with admirable resignation, with that deep and tender piety which had ever distinguished her, she tranquilly prepared for her departure to the land of the blessed. Her sufferings were great and must have cancelled in part the debt of human weakness, for though it is a great grace to persevere to the end in religion that alone does not sanctify us; oftentimes the old leaven must be purged out by trials and afflictions, and happy those to whom such are sent, and who know how to turn them to their soul’s profit.

The announcement of Sister Mary Vincent’s death on the morning of May 22, evoked a burst of universal sorrow, hundreds of people: rich and poor, widow and orphan, hastened to the convent to condole with the bereaved Community and take one last look at one whom they had loved and revered, and with the silent ejaculations of “rest eternal” from the tearful mourners the remains of our dear Sister were conveyed by loving hands to the vault in St. Mary’s Cathedral.

While affectionately cherishing the memory or our dear departed ones, we must not too readily believe that heaven is won, for there is more cruelty than kindness in such an assurance; but let us ever bear in mind that the present is the reign of God’s mercy, and after death His justice governs, as a pledge of our loving remembrance let us offer up our supplications that if any stain of human frailty hinder their admission to eternal rest, it may speedily be forgiven. REQUIESCAT IN PACE.