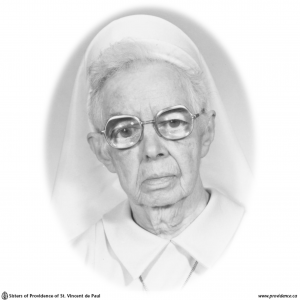 “I think the primary aim of our Institute, according to our founder, is works of charity – not so in much giving money, as in giving  ourselves.”

Sister Mary Viola Cobey not only wrote these words, she lived by them. Perhaps the most striking example of her doing so was in the years when she lived at St. Mary’s Hospital in Camrose, Alberta. That was from 1941 to 1951. During those ten years, she worked in the maternity ward on the top floor of the hospital and was in charge of the x-ray department on the bottom floor. Many a trip she made between the two areas in the course of a day. At night she slept in a ward with the other Sisters and was on call for night duty. After five summonses on a particularly busy night, one of her companions wearily asked, “Why don’t you just stay up?”

The physical and spiritual energy, which fueled Mary Frances Cobey, came to life at her birth on the 17th day of April, 1897, in a farmhouse on the Front of Yonge and Escott, Leeds County, Ontario, and at her baptism, two weeks later, in St. Brendan’s Church at Rockport. She was the eldest girl in a family of six girls and two boys. However, she never knew the youngest child, who was born after she had entered and died within a few years. On receiving the sad news of this little Evelyn’s death, Sister Mary Viola wrote from the west, “Tell me what she looked like, so I will recognize her in heaven.”

This simple and solid faith was a tradition in the Cobey family. The father, Joseph Edward, had learned the Bible stories from his father and in turn passed them on to his children, gathered around him. This was their main religious education, except for the excellent sermons of their pastors, for the children attended a public school. Frances was a weekly communicant in those days when confession and a long fast had to precede each reception. Sometimes she and a young boy preparing for the seminary were the only ones to receive.

The idea of giving her life, too, to God’s service likely came to Frances as she watched her father set out to drive the Sisters of Charity of the House of Providence from farm to farm on their collecting tours in the county. It took some time, though, for her to overcome her apprehension enough to apply. She felt unworthy, was concerned that she could not meet the challenge and was afraid of being lonely away from her family. In the hope of distracting her from her deliberations, her father had her enroll for piano lessons; but “the call”, as she put it, “was so strong” that she felt she must follow it. On September 26, 1916, she wrote to the Superior General at Kingston, requesting to enter in October.

Her vocation was well-tested before she made final vows, for her mother fell ill with tuberculosis. Frances was sorely tempted to leave and resume once again her work of helping with the younger siblings. From 1919 until she died in 1926, Mrs. Cobey (Ann Agnes O’Brien) had to spend most of her days isolated from her family in a tent erected in their yard. Frances placed her trust in God and somehow the family managed without her needing to return home.

In religious life Frances found “such happiness as the world cannot give” and she endeavoured always to be “pleasing to her Spouse and edifying to her companions.” When it came to postings, she said, “I am always content with just what my Superiors assign to me, for I see that God’s will for a religious.

In those days, temporary vows were taken only once – for three years – and then came final profession. The next step for Sister Mary Viola, as she was now called, was nurse’s training at St. Vincent de Paul Hospital in Brockville. By 1926 she had taken up the role of operation nurse and Nursing Supervisor at St. Francis Hospital in Smiths Falls. It was not uncommon for our Sisters to assume responsibilities really beyond them in the beginnings of our health care institution.

Sister Mary Viola was much more ready, by dint of experience, to act as head nurse on the floor when she was transferred to St. Joseph’s, Edmonton, in 1937. After that came the exhausting period in Camrose to which we have already referred. Through these years Sister was continually upgrading her qualifications in nursing and x-ray technology. She was registered in both Ontario and Alberta. In 1951 she was transferred to Montreal and obtained her Quebec registration while on staff at St. Mary’s Hospital.

In 1954, Sister Mary Viola returned to the west, first to Daysland as Night Supervisor of Nursing, then to Athabasca and Daysland as Superior, and finally to St. Joseph’s Hospital in Edmonton. In all she spent thirty-two years in the west and fifty-two years in health care. Everywhere the high quality of her contribution was recognized. An Edmonton doctor, M. Mallett, wrote to her at Camrose:

“I thought that you might like to know that these films which we have reviewed today (from your x-ray department) show very satisfactory technique and it is a pleasure to report films of such quality.”

Patients testify that, as a nurse, she faithfully procured for them everything that they needed. The religious who had her as a Superior, acknowledge that she made their residence a pleasant home for them.

Sister’s last active years were at Providence Motherhouse. She came there in 1971 and for two years worked in the infirmary. This work was followed by an assignment to assist in the altar bread department. Although she was never named for the laundry, she sometimes helped there as well. As a youngster at home and in all her working years, it was noticed that Sister Mary Viola did not walk, but lad a “quick half-running movement”, which enabled her to accomplish a great deal in one day. After she was well past eighty years of age, she could agree that she was “a great worker”, but she would add, “The trouble is, they won’t give me anything to do.” However, she never sat idle, for she was very skilled at fancy work and had even mastered the more complex art of tatting.

Sister never forgot, either, what others did for her. When she was beginning her work in x-ray in Smiths Falls, one of the Sisters drew a chart of the skeleton for her use and she never ceased thanking her for it.

Ordinarily, Sister Mary Viola was full of good humour. With her sharp wit she could enter with ease into any fantasy dialogue and repartee. It was particularly sad, therefore, to see her highly distressed and agitated during the months just prior to her death. She suffered a stroke on March 23, 1986, which brought on the mood change. From then until her death she was a resident in the Infirmary where she had served, except for a short time hen she needed hospital care.

About 3:00 a.m. on August 15, 1987, while Sister Frances Piasecki was keeping watch at her bedside, Sister Mary Viola gently passed away. Her death was attributed to pneumonia. It was fitting that on the feast of the Assumption, she should pass to her heavenly reward, for Sister had inspired many with her devotion to the Blessed Virgin Mary.

Sister Mary Viola’s funeral Mass on August 17, at Providence Motherhouse, was concelebrated by Archbishop F.J. Spence, Reverend T. Raby, Reverend W. Steacy, CSsR, and Reverend L. Byrne. It was quieter than many funerals, but that is as this humble Sister would have wanted it.

For her spiritual reading Sister Mary Viola often chose the classics on prayer, such as St. John of the Cross and St. Teresa Avila. The few written meditations that she left behind reveal a grasp of the simplicity they advocated. She had a profound trust in God’s love, despite weaknesses she saw in herself, and she resolved to be content with whatever He allowed to happen in her life. Sister found the loss of family members one of life’s most difficult crosses, but at the same time, she felt close to the departed ones and invoked them as members of the Communion of Saints. Now that she, herself, has come to the Beatific Vision, we know that she will remember us.