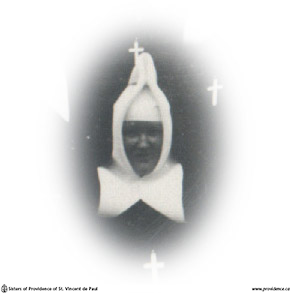 Coming from Brockville, Sister entered the Novitiate then at St. Mary’s of the Lake, August 15, 1912.

As a member of the Community, Sister M. Wilfred spent most of her religious life in the West. For many years she seemed almost an essential part of the hospital in Daysland. She conducted the business end of the hospital, being in charge of the office there for several years. Although she had been in delicate health for a long time it did not prevent her from managing the affairs of that institution efficiently and with entire satisfaction.

Her death was rather sudden and her loss greatly deplored by those who knew her, especially her Sisters to whom she meant so much, because of her cheerful disposition.

She was devoted to her work and a faithful religious at all times. Sister had done much on behalf of God’s poor beyond the distant prairies of the West where her charity and kindness toward them were a solace for soul and body. We trust her sacrifices have won for her an everlasting crown of glory in Heaven.