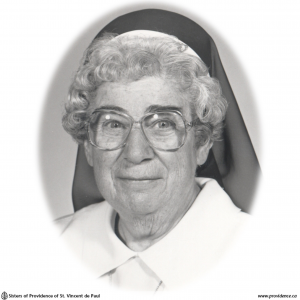 In July, 1988, when the first Directory of the Sisters of Providence of St. Vincent de Paul was published, in the information alongside Sister Wilhelmina O’Hearn’s photograph these words appeared: “Personal interests…cheering up depressed and upset Sisters. My greatest interest – listening.”

This generous availability to other people seems to have been cultivated in her family. An account of the life of Father Gerald O’Hearn, her brother, shows he had the same trait: “He was fully human, compassionate, kind, and a man of joy. He had a unique charism for people.”

William O’Hearn and Margaret O’Neill raised their six children on a farm at South Lake, Ontario. The family has been described as “always very proud to maintain and exemplify the Catholic faith” Joy, even in the face of suffering, and willingness to help others to bear their burdens was integral to the faith they lived. The O’Hearn’s belonged to St. Barnaby’s Parish, Brewer’s Mills. The only surviving member is Eugene, a Redemptorist brother, now resident at St. Joseph’s Hospital, Edmonton.

Mary Irene O’Hearn was the youngest child. At age seventeen she could wait no longer to enter the convent, for she said, “It has always been my intention to become a Sister, in order to serve God more faithfully.” She had then completed Grade Ten in her schooling at Gananoque.

Irene began her Postulancy at the House of Providence, Kingston, on August 15, 1926. It was indeed fortunate that her intention was so firm because her novitiate companions were considerably older than herself. As a mature religious reflecting back on this time, she remarked, “I felt like I had entered an old folks home!” With the good cheer which was to become her trade-mark, she made the best of the situation, so much so that the Mistress of Novices was able to report to the Council, a year later, that she was “healthy, generous, self sacrificing, with a pleasing manner.” When first vow day came, the junior novices put these lines into a poem for her departure:

“ …We will bow to Sister O’Hearn
Her smiling, happy way we should all learn”

Bearing her new name, Sister Mary Wilhelmina, Irene was sent west in 1929 to Providence Hospital, Moose Jaw, to train as a nurse. She returned home less than two years later in time for her brother, Gerald’s ordination. The records are not clear, unfortunately, as to the next few years of Sister’s life, but somewhere in that time, it was decided that, rather than pursue a career in nursing, she should turn to music. Consequently, although as yet unqualified, she was appointed to Apple Hill, Ontario, as music teacher. She did have considerable talent, but never-the-less it was certainly a time for her trust inn Providence to be tested. Providence did not fail her. Here is her account of what happened:

“My experience of God providing I shall never forget. I was given permission to go to Brockville for piano lessons, if we could manage to pay train fare and lesson fee. You can imagine my lessons were very few. However, to my surprise, one day I received $100.00 to help pay for my musical education. To this day I am not sure who the donor was. I might also add, I had every success in musical festivals and music examinations.”

As you can see, the Apple Hill house was a poor one, but the Sisters shared the little they had with those in the village who had even less. Sister was to remember her six years there as “the happiest years of (her) religious life”.

After six years, Sister Wilhelmina moved on to take charge of the music studio in Trenton, then Perth, Belleville, Arnprior, Tweed, and Trenton a second time. All the while she was gradually improving her qualifications. She finished her high school education, earned her certification as an Associate of the Toronto Conservatory of Music in piano and the Royal Conservatory of Music in voice. As well as the piano students, she was responsible in each locality for the church organ, the choir, and singing lessons in the schools. To prepare herself for the latter work, she had obtained a supervisor’s certificate in elementary and high school music.

Because of her own great love for the religious life, and her awareness of the immense good that could be done by a fervent Sister or priest, Sister Wilhelmina gently nourished vocations among her students. Several Sisters of Providence are grateful for her support in their following of Christ’s call. Pastors, where she served, do not forget the encouragement and assistance she gave them in their ministry.

Sister Wilhelmina was named Superior of St. Peter’s Convent in Trenton from 1968 to 1977, the period of her second assignment there. As well as fulfilling the duties of that office and those that came from her work with music, Sister found time to befriend the people of the town; so much so in fact, that when it came time for her to leave, they sent letters to the Superior General asking that the decision be reconsidered.

“We have learned with regret that our beloved Sister Wilhelmina is being posted to Belleville. We are hoping that you will reconsider this decision because Sister has helped tremendously in building the Christian Community, not only in the parish of St. Peter’s but in the town of Trenton, as a music teacher and a parish visitor to the hospital and the shut-ins. She is a tower of strength to the clergy and the lay societies of our church. With Her warm and cheerful personality, a heart full of kindness, sincerity and openness to all, she radiates the love of God, and as His representative we feel she is essential to our parish.”

This letter was signed by eight women parishioners. Part of a letter from another woman reads:

“I worked at the local hospital for a period of nine years and saw many patients of all religious faiths feel happier after her visits with them. I have seen Sr. Wilhelmina cross our street in snowy, blowing weather taking a dinner to a very sick, elderly lady. I realize that she can do all the above to others in Belleville just as well, but whatever is Trenton going to do without her?”

A compromise was struck. Sister Wilhelmina moved to Belleville but commuted to Trenton to carry on with her music and parish work there.

This strenuous arrangement could not last long. After one year, it was discontinued and in fact Sister retired from formal music teaching. In all she had given 46 years to this apostolate. In 1978 she was appointed to St. Mary’s of the Lake Hospital, Kingston, as Superior and pastoral care worker. In 1980 she moved on to Providence Manor to carry out the same two missions there. Music was so much in her, however, that she could never give it up altogether. In these two health care institutions she served as regular organist for services in the chapel and pianist for singsongs and other entertainments throughout the year.

Everywhere she lived, Sister “Willie” gently drew to herself and to God residents and Sisters alike. The Sisters testify that, “she was more concerned for people than for rules”, and she could be counted on to give practical, down to earth advice. With a unique joy she embodied the Sisters of Providence charism in compassionate service and their tradition of hospitality. She would be the first to acknowledge, however, how important it was to her, too, to be surrounded by a loving community.

During the early 1980’s Sister’s health began to decline. She developed diabetes and cancer, underwent surgery and on one occasion almost died. In 1984 it was decided that she should come to the Motherhouse and assume lighter duties, such as working part-time at the switchboard and caring for the dining room. As well intentioned as this arrangement was, it proved to be too little for her zeal. She, therefore, continued assisting in pastoral care at Providence Manor, and added on some visiting at Kinston Psychiatric Hospital. She was an active member of Heathfield choir and often went to the Marian Infirmary to cheer the sick, playing their old-time favourites on the piano.

Further health problems appeared in the late 1980’s. Sister Wilhelmina suffered then from poor circulation and heart trouble. With each crisis it was harder for her to ‘bounce back’, but somehow she did. Even the loss of one leg in May, 1987, slowed her down only until she was able to accustom her self to getting about in a mechanized wheelchair. There was increasing concern for her in the difficult days just before the amputation. Her response to inquiries was, “I have just taken up a new ministry – suffering. You know how everyone likes a new ministry once in a while.” Her courage was an inspiration to all. The missionary Sisters wrote from Peru, “Your example really helps us to accept the crosses which God puts in our path.”

As often as she was able, Sister Wilhelmina went by handicapped bus to Providence Manor to be with her brother, Father Gerald, in his retirement there. She was bereft of him in December, 1987. Another death that was also very difficult for her to bear was that of Sister Carol Cornish in January, 1989. Sister Carol had lovingly supported Sister, as only another amputee-wheelchair user would be able to do.

Sister Wilhelmina filled all her days with a pretty full round of activities, following a specific time-table which she had worked out in order to accomplish as much as her strength would allow. She put in relief time at the switchboard, helped to prepare materials for mailing in the communications office, wheeled around the dining room in her “Cadillac” after supper arranging a card game, produced beautiful handcrafts, and loved to chat and “catch up on the news” with her many visitors.

April 13, 1989, was no different. About 9:00 p.m., the evening’s card game being finished, she retired to her room. There, alone, she suffered a fatal heart attack. When the nurses discovered her, nothing could be done except to summon Father Wm. Steacy, CSsR, who gave her the final anointing.

The funeral Mass on April 18 at Providence Motherhouse was celebrated by His Grace Archbishop J. L. Wilhelm, together with the Vicar General of Kingston Archdiocese, Reverent T. Raby and fifteen priests. Monsignor J. G. Hanley, in the homily, reviewed the place of music in scripture and liturgy. He gave thanks to God for Sister Wilhelmina’s talent and virtue and joined his voice to Shakespeare’s praying, “If music be the food of love, play on!” The interment was in St. Mary’s Cemetery, Kingston.

When Sister Wilhelmina O’Hearn gave the thank you address on behalf of the Jubilarians of 1986, her concluding words were: “Continue please, to pray for us that we may ever be true to our spouse and faithful to our community, whatever be the miles we have to travel.”

Now that she had covered the last mile, the words of Sister Gertrude Casey’s poem of tribute, are a very fitting reply:

“We marvel at the way you kept going to your duties to the very last day.
You surely didn’t bury your talents. ‘God reward you’ is all we can say.”