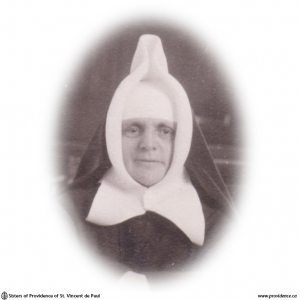 Sister had been ill but a short time, having taught in her class room until the closing of school for the Christmas holidays. The news of her death was unexpected and caused not only surprise but regret as well, among her own Sisters and the people of Portsmouth, where she had taught during the previous nineteen years, as principal of St. Michael’s School.

Teresa Evelyn Dowdall of Perth entered the Providence Novitiate, Kingston, after graduating from Ottawa Normal School, in 1908. After her profession she was appointed to teach in her own home town, at St. John’s School, Perth. Later she was appointed in turn to the schools of Arnprior, Gananoque and Portsmouth.

Sister Mary William although ill but a comparatively short time, had suffered greatly, and for years previous, her health had been anything but robust. She never gave in to her ailments until at last it was discovered that she had a cancerous condition of the stomach which finally caused her death.

She was a self-sacrificing religious, and at all times gave herself graciously to her work in the class room. The people of Portsmouth appreciated her efforts in behalf of their school and after Sister’s death; they contributed generously towards Masses for the repose of her soul.