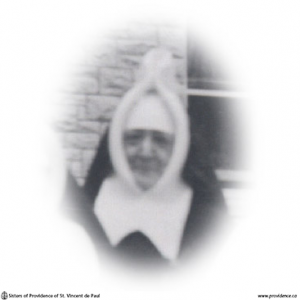 On March 13th, 1976, the Community lost one of its eldest members when Sister Mary Winnifred died in the infirmary of the Motherhouse at the age of 94 years and 10 months.

Seventy years previously Norah Rourke at the age of twenty-four left her home in Ballina, County Mayo, Eire, to try new fields in Canada. That she left pleasant memories in her home parish is attested by the letters on her file at Heathfield.

One is the recommendation from her pastor, Father Walter Henry, when she applied for admission to the novitiate. He wrote: “I had been acquainted with Norah for some years before she emigrated and I as well as all who knew her had the highest regard for her moral and religious character. It was everything to be desired in a girl. I am sure she is suited for the step she is now taking – entering religious life.”

The other letter, dated January 12, 1977, is from Sister’s niece, a retired nurse in Ballina. She tells something (which she learned by hearsay from her patents) of Norah’s early life. Born on a farm, with three brothers (her only sister died in infancy) she learned to help not only her mother in the house but also her father and brothers in the work of the farm. In fact, it was told of her that she could handle a young horse better than most men. She lived with her brother and his wife for a year after their marriage and her sister-in-law never forgot how kind Norah was to her and how she helped her to settle and be happy in her new surroundings. Norah had a typical Irish wit and was always ready to play a harmless practical joke.

These qualities were to be an asset to Norah when, after her first year in Canada spent helping our sisters in St. Vincent de Paul Hospital, Brockville, she applied for admission to and was accepted in the novitiate at the House of Providence. In 1909 she made profession as Sister Mary Winnifred and for over forty years laboured in the different houses of the Institute.

She was skilled in cooking and in the supervision of the dietary departments of such large houses as the Motherhouse or the hospitals. When she was serving as Local Superior in the smaller convents of Trenton and Perth, she was called upon to come to the Motherhouse for special days when meals were served to large numbers.

She was destined to spend a long period of relative inactivity, for a few years at the House of Providence and then for twenty-three years at the Marian Infirmary of the Motherhouse. It was during these years that her kindly disposition enabled her to help many of her suffering sisters, visiting them and praying at their deathbeds; and her never failing Irish wit made it a pleasure for sisters to drop into her room for a chat. In her last few years her sight was seriously impaired and she could not spend much time reading. But she kept in touch with her relatives in her native land and enjoyed the letters her niece was faithful in writing. She was able also to enjoy the celebrations for her Golden Jubilee in 1959 and her Diamond anniversary in 1969. In the spring of 1976 an epidemic of flu broke out in the infirmary and Sister Mary Winnifred was one of the most serious cases. She developed virus pneumonia and it was evident that she could not rally. On the night of March 12th Sister Mary Hamilton remained with her – the night nurses were busy with so many patients; and about 11 a.m. on the 13th the Community was advised that she was dying. Our Mother General, Father Buckley, chaplain, and several sisters were with her when she breathed her last at 11:30.

The funeral took place on March 15th at 9:30 a.m. A half hour before the Mass Father Paul McAvoy came in and recited the Rosary with the Community. Father’s family of Brockville were long-time friends of Sister’s; Father Paul had known her from his childhood and had visited her regularly. He concelebrated the mass with His Grace Archbishop Wilhelm and offered the prayers at the grave.

Sister M. Winnifred’s long years of devoted service and her patient and prayerful acceptance of years of suffering will remain an inspiration to all members of the Community.