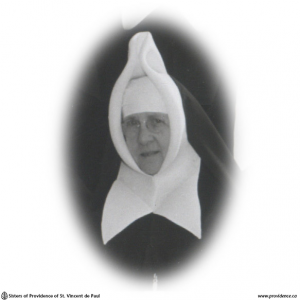 Sister Mary Zita has the distinction of having reached the most advanced age of any member of the Sisters of Providence, Kingston, since its foundation in 1861. When she died on December 28, 1971 she was 97 years and 5 months.

When the Community was only thirty-seven years old, Anastasia Welsh from the near-by parish of Howe Island came to Kingston to offer herself with her youth, health and talents to the service of God in the House of Providence. It was March 25, 1898, and whether the young woman knew it or not, it was the anniversary of the admission of the infant community in 1862 of the first postulant, later to be the first Superior General, Mother Edward McKinley.

Anastasia had completed her High School education and taught for a few years in local schools. When she made profession as Sister Mary Zita in 1900 she resumed the apostolate of the classroom which she was to carry on for forty years. She served in Kingston, Trenton, Belleville, Smiths Falls, Perth and Gananoque in the home diocese and in the diocese of Alexandria at Glen Nevis and Apple Hill. In the latter parish she was assigned along with her teaching duties those of Local Superior of the convent.

In 1942 she was elected First Assistant to the Superior General, Mother Mary Anselm, and filled that post for six years. After brief periods at Rosary hall, Toronto and Sacred Heart Convent, Batawa, she returned to the Motherhouse where she kept herself busy sewing, mending, crocheting, and making quilts until failing sight obliged her to lay down her needle. She was at the same time an avid reader, and it was a painful mortification for her when she was unable to read new books or to refer to older ones to recall exactly something she remembered having read. For a long time, in fact until a few months before her death, she followed with the aid of a magnifying lens the prayers of her breviary and missal.

Her mental faculties remained unimpaired and she was able until the last week or two of her life to assist at Mass in the infirmary chapel which is a few doors from her room. She enjoyed frequent visits from relatives. Her brother, the only survivor besides herself of a family of eight, although just four or five years her junior travelled from Edmonton two years ago to see her. Nieces and nephews of the Prior family, who live in the vicinity, visited her regularly, as did Sister Mary Helen Welsh, an Ursuline religious from Chatham. Other nieces and nephews of the Welsh families and members of the Henderson family kept in touch with her by occasional visits, frequent letters and gifts of flowers.

On the morning of December 16th she suffered a severe stroke, and the doctor advised that she be transferred to hospital where she could be given intravenous. She lived for a week but never regained consciousness; in the early morning hours of December 23rd she slipped quietly away. Our Mother General and two members of the General Council had been to see her the preceding day.

As the feast of Christmas fell on Saturday, the funeral could not be held until Monday, 27th. So for three days Sisters prayed beside her remains and each evening the community assembled for the Rosary or a Bible Vigil.

In the absence of His Grace the funeral Mass was offered by the Vicar-General, Monsignor Hanley. Present in the sanctuary were Msgr. Farrell, and Fathers Buckley, Keyes and Way. The honorary pall-bearers were four Sisters who had been novitiate companions of Sister’s niece, Sister Mary Jane Prior, to whom she was deeply attached and who had predeceased her by four years. Four nephews were active pall bearers, Bernard Jr., Melville, Colin Prior and Leonard Welsh.

The one surviving brother, Mr. Fred Welsh, lives with his daughter now in Coquitlam, B.C.

Sister Mary Zita will be remembered in the community for her optimism, her devotedness to duty, her generosity in helping others, and above all for her strong faith and her ardent prayer life.