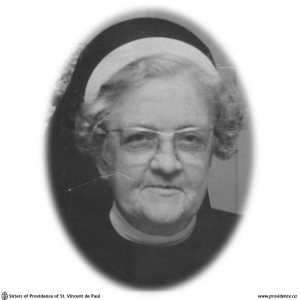 The second month of 1983 brought the second death of the year to our Community, the Sisters of Providence of St. Vincent de Paul. Just two weeks after Sister Mary Edna’s death, Sister Mary Mercedes slipped quietly away.

Of her sixty-eight years of religious life, Sister required nursing care of only her last five years in the infirmary of the Mother House. Even then, although her memory was seriously impaired, she was in fair physical condition, quiet-spoken and cheerful as she had been throughout her active life.

But during her final month her health deteriorated rapidly. A mild heart ailment worsened, she became noisy and refused to co-operate with nurses in their care for her. On the night of February 3, about 10:00 p.m., as she was being attended by a nurse, she collapsed. Sister Margaret Rose, Superior, and Sister Marion Farnand were summoned immediately. They applied oxygen, but to no avail. Sister Mary Mercedes had answered her last call from God.

Grace Leahy had received her first call on September 18, 1895, when she was born into the home of a well-known Kingston couple, Thomas Leahy and Mary Real, and baptized four days later in St. Mary’s Cathedral. She was the eldest of nine children, two of whom died in infancy.

That the Leahy family was a truly Christian one is revealed by a note on a Christmas card found among Sister’s correspondence. The card had been sent to her father by her sister, Catherine. Catherine recalls, “our school days, with the long table cleared for our homework; Mother at the head of the table with her sewing, you at her side as always, reading softly to her some appealing passage of wit, humor, irony or pathos; our beloved brother (the only son) occasionally providing comic relief by some boyish, innocent prank; the evening routine terminating by the Rosary. “Thank you again, and dear Mother, for a most happy and wholesome home life, you will always have our love, respect and thanks for gifts more precious than gold.”

As the Leahy home was on Montreal Street, a few blocks from the House of Providence, the Sisters got to know these young girls, and Mother Mary Vincent McDonnell, a member of the General Administration, sent one day for Grace and spoke to her of a religious vocation. The result – this fun-loving girl of twenty years left her happy home and the world that looked promising and entered the novitiate of the Sisters of Providence.

After profession in 1917, she went to Maryvale Abbey High School, Glen Nevis, to complete requirements for entrance to Teachers’ College, and the following year took professional training at Ottawa College. Then followed a teaching career of almost half a century.

She was especially adapted for training very young children and so primary or other elementary classes were entrusted to her. She spent eight years in Gananoque, ten in St. Michael’s, Belleville, eight in St. Malachy’s, Montreal, and thirteen in Prescott, with shorter terms in Arnprior, Newmarket and Trenton.

Sister Mary Mercedes had a gift that is an asset to a teacher of junior grades in her talent for music. She used this gift in training Grades 2-4 children into school bands.

The best known of these was the Belleville band which took first place in music festivals in various centers in Eastern Ontario. A cherished memory for this group of young musicians (now adults) was their appearance on the steps of St. Mary’s Cathedral, Kingston, in 1939 when they played before King George VI and the present Queen Mother.

Sister retired from teaching in 1968 and for ten years lived at Providence Manor occupied in light duties before coming to the Marian Infirmary in 1978.

The funeral Mass was celebrated by Msgr. J.G. Hanley, Vicar General, in the absence of His Grace, with Fr. Paul McAvoy as concelebrant. Monsignor gave the homily.

The only surviving member of Sister’s immediate family is a sister, Nora, who is a patient at Elizabeth Bruyere Health Centre in Ottawa. A niece, Mrs. Molly Belanger (nee O’Keefe) with her husband and two sons attended the funeral.

In St. Mark13:36 we hear Our Lord say, “Whoever welcomes a little child in my name welcomes me.” We have confidence that He gave a warm welcome to Sister Mary Mercedes who in religious life welcomed so many little children in His name.