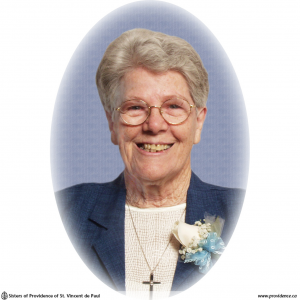 Monica Gannon was born on September 29, 1922 on the family farm in Greenview, Ontario, the fifth of seven children born to Elizabeth Cassidy and Joseph Gannon. When Monica was four years old, her father moved the family to Prince Edward County to take up farming once again in Bloomfield. She received her elementary education at the Hallowell Public School. When she was twelve she obtained her first employment at the school. Her duties were to start the fire in the wood stove each morning and to sweep the floor at night for $3.00 a month which she gave to her mother to purchase material to make items of clothing for her two sisters and younger brother.

In 1938 she enrolled in gymnastics and won the Senior Girls’ Title in the Prince Edward County high jump and 500 yard dash.

Following elementary school, she attended Picton Collegiate and Vocational School obtaining her Grade 11 Commercial Diploma in 1940. She was then employed for four years as a bookkeeper at Grinrod Motor Sales in Picton and took the opportunity to learn to drive but the only vehicle available was a tow truck.

Her first assignment was to the Business Office at St. Mary’s of the Lake Hospital in Kingston. After two years she was appointed to St. Vincent de Paul Hospital in Brockville where she remained for the next eleven years. In 1961 she returned to the Motherhouse to further her studies in business management and accounting and to work in the Business Office. She enrolled in a three-year correspondence course from the University of Indiana which she completed in two years. In 1963 she was appointed as Business Manager at Saint Anthony’s Home in Moose Jaw. Two years later she was assigned as Business Manager at St. Francis Hospital in Smiths Falls, then at Holy Family Hospital in Vancouver and finally at St. Vincent de Paul Hospital in Brockville. In 1971 she returned to the Motherhouse to assist the General Treasurer a position she held until her retirement in 2003 due to ill health. When her health improved she worked a couple of hours each day in the Financial Archives. In 2005 she began working in the Congregational Archives and remained in this work until 2009.

Sister Monica was a joyful fun-loving person and a woman of deep faith who loved and appreciated her Congregation, her family and friends.

Sister Monica was called home to her loving God on March 30, 2015. The Mass of Christian Burial, held in the Chapel of Mary, Mother of Compassion, Providence Motherhouse on April 7, 2015, was presided over by Friar Edward Debono, OFM Conv. who also delivered the homily. In attendance were her sister, Mary Frederick of Picton, her many nieces and nephews, and friends who came to celebrate her life with the Sisters.