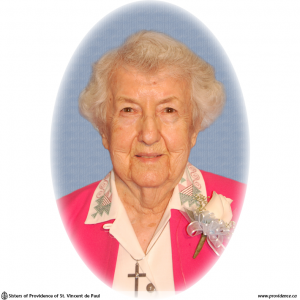 Monica and her twin sister, Veronica, were born on April 6, 1919 in Queensboro, Ontario, the last two of seven children of Agnes Genereaux and Alexander Laton.

Following her First Profession of Vows, she returned to nursing beginning at St. Mary’s Hospital in Montreal and continued at St. Francis Hospital, Smiths Fall, Providence Hospital and St. Anthony’s Home in Moose Jaw, St. Vincent de Paul Hospital, Brockville and finally at the Motherhouse infirmary. She also served as superior in Moose Jaw and for the Infirmary. She held the position of Director of Nursing in many of the hospitals and health care institutions where she served. In 1960 – 61 she studied Hospital Nursing Service Administration and in 1971 Rehabilitation Nursing at the University of Saskatchewan. During her nursing career she earned the love and respect of doctors, all staff and patients alike. From 1977 – 1981 she was the Director of a Home in Kingston for girls with emotional and social difficulties. For the next two years she was assigned to St. Mary’s of the Lake Hospital and then returned to the Home for Girls until she retired. During her years in Kingston she also tended to her disabled sister who was a patient at St. Mary’s of the Lake Hospital for many years.

She will be remembered for her wittiness, her joyful spirit and her compassionate caring of all with whom she lived and worked.

Sister Monica was called home peacefully to her loving God on Friday, October 7, 2016. The Mass of Christian Burial, held in the Chapel of Mary, Mother of Compassion, Providence Motherhouse on October 12, 2016 was presided over by Friar Ed Debono, OFM Conv., who also delivered the homily. The Rite of Committal was at St.  Mary’s Cemetery, Kingston.