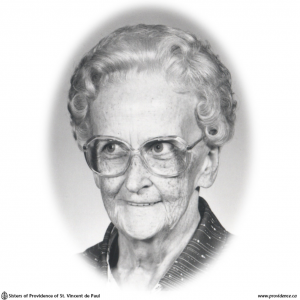 Margaret Monica Shea was born in Vinton, Quebec on January 30, 1914. Vinton, Quebec could have been a village transplanted from Ireland. Almost every family living there on the banks of the Ottawa River was Irish Catholic. The people made their living on farms which were adjacent to one another and fronted onto the country roads.

Many priestly and religious vocations were nourished among these God loving people. Among those who heard the call to religious life was Monica Margaret She, the daughter of Daniel Arthur Shea and Mary Louis Sloan. Both of Monica’s parents were grieving the death of a former spouse. Each had a child to bring to a new family. These two families blended and were enriched by the births of four more children.

Monica and her siblings were well grounded in their faith. Prayer, especially the family rosary, formed an important part of their daily lives. Even in the bitter cold of winter the family was piled on a large sleigh for the two and a half mile drive to Sunday Eucharist. When tragedy struck any family the whole community turned out to help. They also made their own recreation by gathering in one another’s homes for parties and dances.

Monica attended Vinton Elementary School and Vinton High School. She then proceeded to an Ottawa business college for more education. In 1934, at the age of twenty, and with the blessing of her confessor, Monica answered a call to enter the congregation of the Sisters of Providence. Because of ill health her superiors advised her to return home, but Monica’s desire to be a Sister stayed with her and five years later she again applied for admission to the novitiate of the Sisters of Providence. She made profession in 1941 taking the name of Sister Mary Agnita. Meanwhile, her brother Dennis entered the Oblates of Mary Immaculate, and was ordained to the priesthood in 1948. Unfortunately, after an active life in the missions, Dennis died in 1974.

After profession Sister Monica was missioned to Maryvale Abbey in Glen Nevis for three years. She remarked that, in spite of the poverty at the Abbey, the Sisters were very happy. The Sisters worked hard, but a great spirit of peace and joy reigned among them and the children in their care.

Through the years, Sister Monica took several courses at the University of Montreal to better qualify her for her work as a record librarian, as well as in the nursing and social service fields. Sister struggled with ill health all her life, but she never allowed her infirmities to prevent her from helping others. As a pastoral care worker, Sister’s own illness and suffering gave her an understanding of the sick and elderly which was outstanding. Her deep faith gave courage and strength to many a discouraged, suffering person. Sister Monica had a great devotion to Our Blessed Lady, especially as Our Mother of Sorrows. She faithfully prayed three rosaries daily and she always hoped she would die on one of Mary’s feasts. Perhaps it was no coincident that she died on a Saturday. Monica was a very independent person and tried to do as much as possible for herself.

In her later years Sister’s acceptance of her suffering made her a source of edification to the nurses and Sisters alike. Her last mission was at St. Mary’s of the Lake Hospital, Kingston, where she laboured for many years keeping the Sisters’ quarters in good condition and in comforting the patients and staff. The chaplain knew her a person who knew what she was about and although she intimidated him at times, he remarked that he always had the greatest respect for this great woman.

In August, 1993, Sister Monica retired to Heathfield. She never lost her zest for life and in spite of frailty managed to go shopping at the colourful Kingston market to purchase her favourite beefsteak tomatoes and cucumbers for quite some time. During her lifetime, Sister Monica formed many lasting friendships with patients, staff and her own Sisters, especially, Sister Anna Marie Willer, who found her to be a marvelous example of patience in suffering, and of trust in Providence. Sister Anna Marie remarked that Sister Monica always prayed that she would not lose her mind. This prayer would seem to be answered because her friend was conscious until her last breath. She recognized those gathered around her bed and understood what was said, even though she had problems responding fully.

Sister Monica died on September 9, 1995, in the 56th year of her religious life. She was survived by one sister, Mrs. Emily Sauriol from Campbell’s Bay. Unfortunately, ill health prevented Emily from attending Monica’s funeral liturgy, but many nieces and nephews, as well as grand nieces and nephews with whom she always kept in touch, joined in the celebration of her life in the Chapel of Mary Mother of Compassion on Tuesday, September 12, 1995. Archbishop Spence, accompanied by several priests, presided. Father Paul McAvoy, a long time friend, delivered the homily in which he said that it was a privilege to know Sister Monica, to whom he affectionately referred to as “Big Monica”. He posed the question, after listing Sister’s many accomplishments: “If she did so much here on earth, how much more is she able to do, now that she is in heaven?”