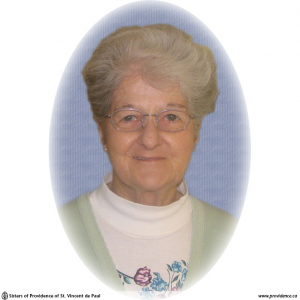 She was born on March 13, 1932 in Brockville, Ontario one of twelve children of Margaret Black and Bernard Hunter. She entered the novitiate of the Sisters of Providence of St. Vincent de Paul on February 2, 1960. After making her profession of vows, she began her ministry as a housekeeper in the convents in King and Trenton, Ontario. This was followed by her ministry as a dietary assistant and later dietary supervisor at Providence Motherhouse.

Sister Nancy touched the lives of many people especially the elderly through her compassionate presence and humour. She was instrumental in introducing “pet therapy” at Providence Manor with her beloved dog, Casey.

The Mass of Christian Burial, held in the Chapel of Mary Mother of Compassion, Providence Motherhouse on November 15, 2013 was presided over by Most Rev. Brendan M. O’Brien, Archbishop of Kingston assisted by members of the clergy. Friar Ed Debono, OFM Conv., was the homilist.