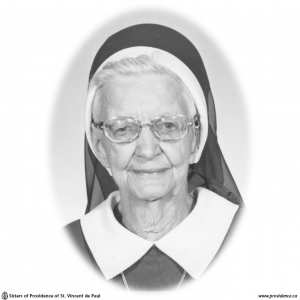 Honoria (Nora) Kyle was born on January 16, 1888, in Swinford, County Mayo, Ireland. She was one of nine children born to Richard Kyle and Bridget Campbell. Four of the girls became Sisters – two in the U.S.A., one in Ireland and Sister Nora here in Kingston.

As a young girl, she planned to go to South Africa but on hearing through a Father McDonald, brother of Mother M. Scholastic who was Superior General at the time, Nora wrote to her requesting permission to enter our congregation. Her letter of recommendation from Dean Stanton states that “she is everything good and I am perfectly confident will proved a treasure to any convent she enters”. And she did prove to be a treasure to the Congregation.

She left her beloved family and friends in Ireland in the company of Anne Marie Brennan (Sr. M. Bonaventure), Mary Swift (left as a Postulant) and Catherine Duffy (Sr. M. Denis), arriving at the House of Providence on October 29, 1906, and was received as a Postulant. On November 21, 1908, she made Profession, taking the name of Sister M. Benignus, and was accepted for Perpetual Profession on November 22, 1910. In 1929 Sister Nora obtained her Canadian citizenship.

After Final Vows Sister went to St. Vincent de Paul Hospital in Brockville where, on January 8, 1914, she was the first Sister to graduate from the nursing school. Her nursing career spanned six decades and was spent primarily in Western Canada. She trained as an x-ray technician in Moose Jaw in 1921 and was responsible for setting up the x-ray department at Providence Hospital; she received her registration from the American Registry of Radiological Technicians, St. Paul, Minn., U.S.A., in 1925.

Sister Nora took great interest in the staff and their families as well as in the patients, where she worked. Even in retirement she visited patients every day and made a special effort to be a friend to those sisters who were far away from home; she loved to take brisk walks and learned to swim at the age of 80; Sister loved music and was an avid correspondent, maintaining many friendships and kept close contact with her relatives in Ireland.

Until her eyesight failed, she read not only for pleasure but to further her knowledge. When the first sisters were to be sent to Guatemala, Sister Nora read everything she could about the region and its people and imparted the information to the Superior General.

Even though sister was confined to bed the last few years of life, she remained very alert, cheerful and thoroughly enjoyed her visits with the sisters and her friends. On August 13, 1990, she took a bad turn, but she was very peaceful and radiant; she slipped away quietly on August 14th at the ripe old age of 102 years and 7 mos.